After Years of Increases, Teen Vaping Rates Take a Tumble

After Years of Increases, Teen Vaping Rates Take a Tumble 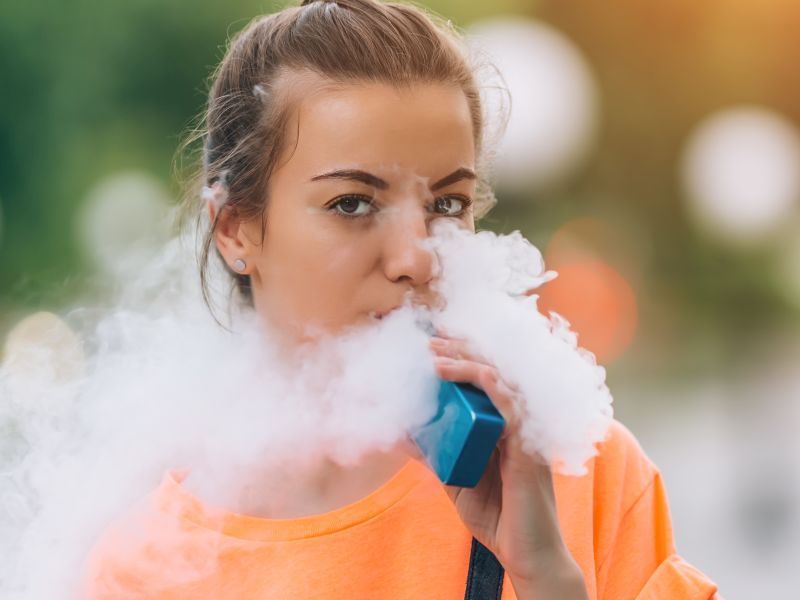 Reversing years of steady increases, the percentage of U.S. high school students who vape has taken a big turn downward — from 27.5% in 2019 to 19.6% in 2020, according to new government data.

Use of any form of tobacco product among American youth also declined since last year, according to the report from the U.S. Centers for Disease Control and Prevention. Still, about 1 in 6 American high school and middle school students — about 4.5 million — used some type of tobacco product in 2020.

The percentage of teens who smoked traditional cigarettes held steady at about 3.3%, the CDC report found.

But the sharp decline in vaping rates was welcome news. It also suggests that recent moves by the U.S. Food and Drug Administration to ban the most enticing, flavored varieties of e-cigarettes has had an effect.

“I think the decrease in use of e-cigarettes is related to many factors, but I believe the elimination of the flavors in these products contributed to the decline in use,” said Patricia Folan, who directs the Center for Tobacco Control at Northwell Health in Great Neck, N.Y.

“Without the flavors, the appeal to youth has diminished,” said Folan, who wasn’t involved in the CDC study.

Previously, vapes could be purchased in flavors that mimicked those of fruit or candy. The ban on these flavored products may have lessened e-cigarettes’ appeal to younger, middle school students, too: The new report found that while 10.5% of middle school kids vaped in 2019, just 4.7% did so this year.

Other recent surveys have echoed these findings. Data from the most recent annual Monitoring the Future survey, conducted by the University of Michigan, show that vaping rates among U.S. teens have leveled off this year, after a steady climb from 2017 to 2019.

Of course, 2020 was also a year of pandemics, school closures and stay-at-home lockdowns, Folan noted.

“With the pandemic and remote learning occurring, parents have become more aware of the tobacco use behaviors of their children,” she said. “I think this phenomenon may result in more parents encouraging their teens to quit or seek help to do so.”

Finally, vaping got a lot of bad press in 2019, Folan pointed out.

“There were many reported cases of respiratory illnesses associated with e-cigarettes, which may have resulted in many teens quitting use,” she said.

The new report was led by Andrea Gentzke of the CDC’s Office on Smoking and Health. Her team analyzed data from the 2019 and 2020 National Youth Tobacco Surveys (NYTS). Among their findings:

And even though vaping seems to be in decline among the young, for the seventh straight year e-cigarettes remained the most commonly used tobacco product among both middle and high school students, Gentzke and colleagues found.

Still, “The decline in tobacco product use over the past year is a win for public health,” CDC Director Dr. Robert Redfield said in an agency news release. “Yet, our work is far from done. Nearly 4.5 million U.S. youths still use tobacco products, putting a new generation at risk for nicotine addiction and other health risks.”

“We remain very concerned about the overall tobacco use rates for young people, including the nearly 3.6 million youth who currently use e-cigarettes,” FDA Commissioner Dr. Stephen Hahn said in the release. “FDA will continue to monitor the marketplace, expand our public education efforts, and use our regulatory authority to further ensure all tobacco products, and e-cigarettes in particular, are not marketed to, sold to, or used by kids.”

The study was published Dec. 17 in the CDC journal Morbidity and Mortality Weekly Report.

The American Academy of Pediatrics has more on tobacco.