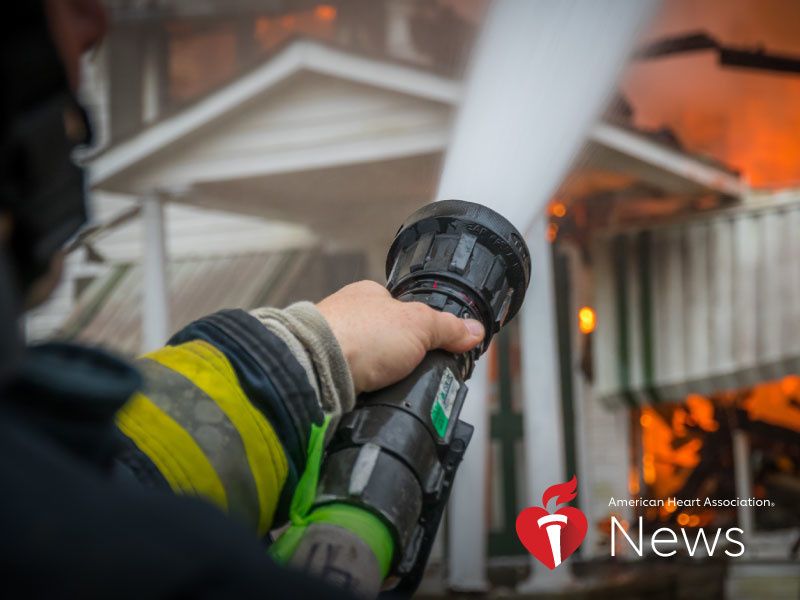 Fighting fires comes with many risks. But new research shows there’s a new one to consider: increased exposure to fires appears to raise the likelihood of developing atrial fibrillation, or AFib, an irregular heartbeat that can lead to blood clots, stroke, heart failure and other problems.

Researchers found the more fires a firefighter fought, the higher the likelihood he or she would report having been diagnosed with AFib. The work will be presented at the American Heart Association’s Scientific Sessions, which begins Friday and is being held virtually. The research is considered preliminary until published in a peer-reviewed journal.

Lead researcher Dr. Catherine Vanchiere, an internal medicine resident at Temple University Hospital in Philadelphia, said she wasn’t surprised to find a link because there was so much anecdotal evidence of “otherwise young, healthy patients who were firefighters coming in to see cardiologists.”

“AFib is a diagnosis that doesn’t always carry symptoms, but it can cause fatigue, shortness of breath or having heart palpitations,” she said. “When you have an otherwise healthy adult coming in with these symptoms, it’s sometimes hard to pin down what’s going on. If that person happens to be a firefighter, now we know we should be looking at AFib as a possible cause.”

There are more than 1.1 million firefighters in the United States. Previous research shows the job’s strenuous physical activity, emotional stress and exposure to pollutants can stress a firefighter’s cardiovascular system. In fact, heart disease is the top cause of on-duty death for firefighters, responsible for 45% of deaths that occur on the job.

In the new study, Vanchiere and her team surveyed nearly 12,000 firefighters nationwide. About 94% were men, and nearly all participants were 65 or younger. The researchers found nearly 5% of those who fought 11 or more fires per year reported being diagnosed with AFib, compared to less than 3% of those who fought no more than 10 fires a year. The group included a mix of paid and volunteer firefighters who mostly fought structural fires (houses and other buildings), though some were fighting wildfires. The data was not analyzed based on the type of fire.

“Firefighters are generally more fit than the general population,” said Dr. John Balmes, professor of environmental health sciences at the University of California, Berkeley School of Public Health. “They also wear air packs that allow them to breathe clean air when fighting structural fires. But this smoke can be pretty nasty. Manmade materials are particularly toxic when they burn. The problem occurs after the fire is out and still smoldering and they take off their air packs. Smoldering fire generates more smoke that contains toxic materials.”

Balmes, who was not involved in the study, is also a professor of medicine at the University of California, San Francisco, where he researches the impact of air pollutants on respiratory and cardiovascular health. Though wildfires are less toxic than the burning of manmade materials, he said, the fires ravaging the western part of the United States are increasingly exposing firefighters to more toxins, as homes and sometimes entire towns are destroyed.

Unlike structural firefighters, “wildland firefighters can’t wear respiratory protective gear because of the high level of exertion involved in hiking into the areas where these fires are occurring,” he said. “There’s essentially no effective way of protecting them at this point.”

For example, he said, the San Francisco Bay Area recently had 40 days in a row of bad air. “We never had that long a period before. Is 40 days different than just a few days? Probably. We need to study cumulative exposures and also recurrent exposures. This is going to happen every year.”

Meanwhile, firefighters who want to reduce their risk of AFib and other heart-related problems should focus on not smoking and eating a healthy diet, Vanchiere said.

“The big picture is that just being a firefighter isn’t the only thing that puts a person at risk,” she said. “There are things under their control other than their choice of occupation. And they need to seek care if they develop symptoms and not be too stoic to go in to see a physician.”