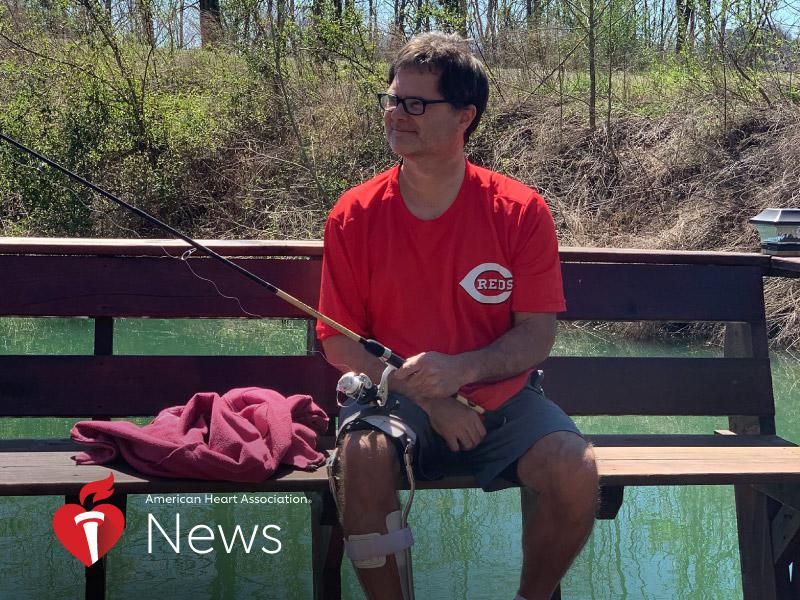 Mark Kincaid greeted spectators coming to the high school football game as he collected donations for his son’s baseball team. His daughter, a cheerleader, was on the field while his wife and one of their three sons watched the game.

As a woman dropped money into Mark’s bucket, his expression went blank. He stumbled backward. A friend standing nearby caught Mark before he fell. He tried to say something but couldn’t speak.

Paramedics working the game came running. Mark’s wife, Tonya, followed the ambulance to the hospital, only 2 miles away.

“When the doctor came out to talk to me, I knew immediately that it was bad,” Tonya said.

Undetected high blood pressure had caused Mark, then 42, to have a stroke. During the CT scan that detected it, he’d stopped breathing and had to be resuscitated. Now, Mark needed surgery to remove a large blood clot in his brain. Yet this hospital in Whitesburg, Kentucky, wasn’t equipped for such an operation. A helicopter would fly him to a hospital in Bristol, Tennessee, more than two hours by car through the mountains.

As he was being transferred, all his buddies, his daughter and her fellow cheerleaders, his son’s baseball team, other adult friends and their children’s friends formed a line on each side. Everyone prayed.

Doctors in Bristol warned Tonya that Mark was unlikely to survive – and, if he did, his quality of life would be low. He would never have use of the right side of his body and he would likely have major cognitive deficits.

“The morning after the surgery, Mark woke up and immediately recognized me,” Tonya said. “He kept proving doctors wrong, and they kept changing their expectations. But they never gave us an outlook of what he does today.”

The stroke occurred in 2009. While Mark still faces challenges, his progress has far exceeded the grim expectations.

His recovery began with several months of rehabilitation, first in the Bristol hospital, then in a rehab facility in Lexington, Kentucky.

Hammock had Mark do more intense inpatient rehabilitation. He also led him to products that deliver low-level electrical stimulation to activate nerves and muscles.

Since starting to use such units on his right hand, leg and foot, his mobility has vastly improved. He also receives injections of botulinum toxin every three months to help reduce muscle spasms.

His cognitive functioning continues to improve; he especially enjoys playing brain games. However, he was left with aphasia and apraxia, which limit his ability to speak.

Mark and Tonya live in rural eastern Kentucky. Their three children are now adults, living on their own.

Now 53, Mark walks 3 miles a day, drives his all-terrain vehicle, mows the grass and even cuts down small trees. He and one of his sons are fixing up a 1970 Chevrolet pickup truck that belonged to his father. When indoors, Mark plays games on his tablet, posts to social media and browses online flea markets.

“I’m not going to have him live in a bubble, because what kind of life is that?” Tonya said.

Five years ago, they joined the first stroke support group in their area.

“We’re like a family,” Tonya said. “You really bond with people. We clap, cheer and cry together. It’s important to know you don’t have to go through this alone.”

Mark and Tonya also give speeches about stroke education and helping health professionals understand the specific needs of stroke patients, from patient care to how buildings should be designed. This year, Mark received a Stroke Hero award from the American Stroke Association, a division of the American Heart Association.

“Mark is such an inspiration for the other survivors in our group,” said Keisha Hudson, who leads the support group as part of her work with the University of Kentucky Center of Excellence in Rural Health. “A lot of the research says after five years, stroke survivors are not going to see any improvement, but I’ve seen Mark continually improve. He’s so motivated that he just doesn’t stop.”