AHA News: He Went From Open-Heart Surgery at 5 to a Black Belt at 7

AHA News: He Went From Open-Heart Surgery at 5 to a Black Belt at 7 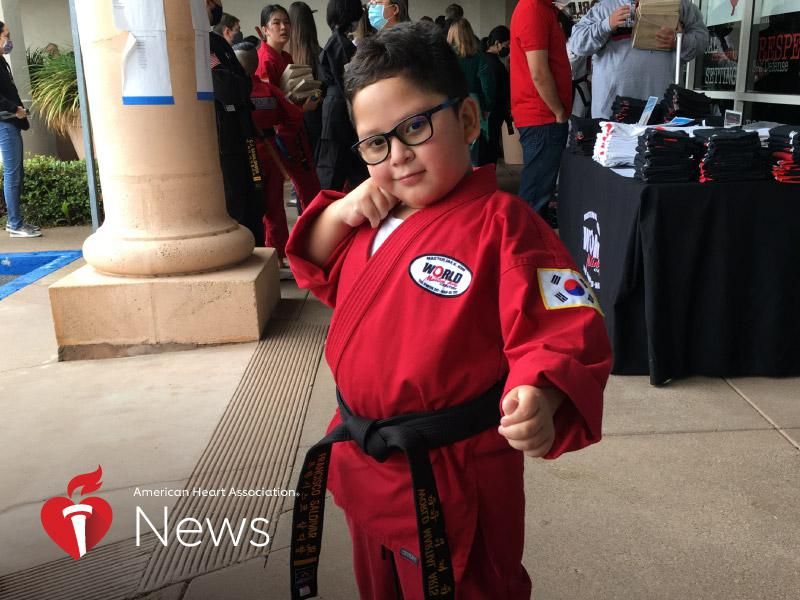 After months of bed rest, then an emergency delivery six weeks early, Maria and Francisco Saldivar were relieved and elated when they saw their baby boy.

After months of bed rest, then an emergency delivery six weeks early, Maria and Francisco Saldivar were relieved and elated when they saw their baby boy.

Soon, their fears returned. Doctors discovered that Francisco “Frankie” Saldivar Jr. was born with three holes in his heart.

“We were worried, scared and shocked as first-time parents,” Maria recalled.

“It turned our world upside down,” Francisco said.

Doctors said the holes might close on their own, so the couple from Orange County, California, tried being optimistic. Indeed, within months, two holes did close.

The one that remained open was an atrial septal defect. This problem allows blood to flow between the heart’s two upper chambers, which can make the heart and lungs work harder. Frankie regularly saw a cardiologist to monitor it.

Atrial septal defects are a type of congenital heart defect, which affect nearly 1% of births – or about 40,000 – per year in the United States, according to the Centers for Disease Control and Prevention. Research shows an estimated 2,118 babies are born in the U.S. each year with Frankie’s problem.

At first, Frankie saw the cardiologist every three months. Then every six months. In 2015, when he turned 2, the doctor cleared him to return annually. Aside from asthma, he was a typical energetic preschooler.

During Frankie’s annual cardiology appointment in 2018, doctors discovered the blood leaking from the hole had worsened. He needed open-heart surgery to repair it.

“It was a matter of, ‘This has to be done now,'” Maria said. “They told us Frankie could be one of those kids who just fall down and die.”

The news was overwhelming because Frankie seemed fine. It was especially jarring to Francisco because one of his childhood friends had died of complications from a heart defect.

“It was hard because we had to be strong, but we were breaking down inside,” Maria said.

In November 2018, Frankie, then 5, underwent surgery. Doctors said it was a success. The best indication came when Frankie regained consciousness. He insisted on walking to the restroom, rather than using the diaper he’d been given.

“We tried to explain that he all these tubes connected to him, but he wouldn’t give up and made us help him walk to the bathroom,” Maria said. “The nurse told us, ‘This kid is going to make a fast recovery because normally they aren’t up and walking this soon.'”

Frankie stayed in the hospital for a week as doctors controlled fluid collecting around his heart and heart rhythm issues. Once he was allowed to check out, Francisco felt the same anxiety of being a new parent. “When I drove him home, I was watching every little speed bump to make sure he was OK.”

Within a few months, Frankie’s heart was functioning normally again. He no longer required medication. He returned to kindergarten that January, two months after his surgery. It took another few months before he was cleared to return to taekwondo.

Today, Frankie is a busy second-grader who recently earned his black belt. In February of this year, he was a top fundraiser for the American Heart Association’s Kids Heart Challenge.

“Nothing stops him,” Maria said. “He’s like the Energizer Bunny.”

“He’s very motivated and is always making goals for himself,” he said. “He’s more mature since his surgery. It’s as if he has seen the world already and is just more conscious of what’s going on.”

The Saldivars said Frankie, who turns 8 in February, is sometimes sensitive about his scar. “It’s a daily reminder of what he went through,” Francisco said.

Other times, he recognizes that it’s part of what makes him special.

“This scar made me stronger,” Frankie said. “I have two speeds now – sonic and flash.”

Frankie must avoid contact sports and maintain a healthy lifestyle, including plenty of physical activity and a heart-healthy diet.

“Someday,” Maria said, “I’ll have to break it to him that he won’t be a lineman for the (San Francisco) 49ers.”