AHA News: Mother Brought Back to Life the Day She Gave Birth

AHA News: Mother Brought Back to Life the Day She Gave Birth 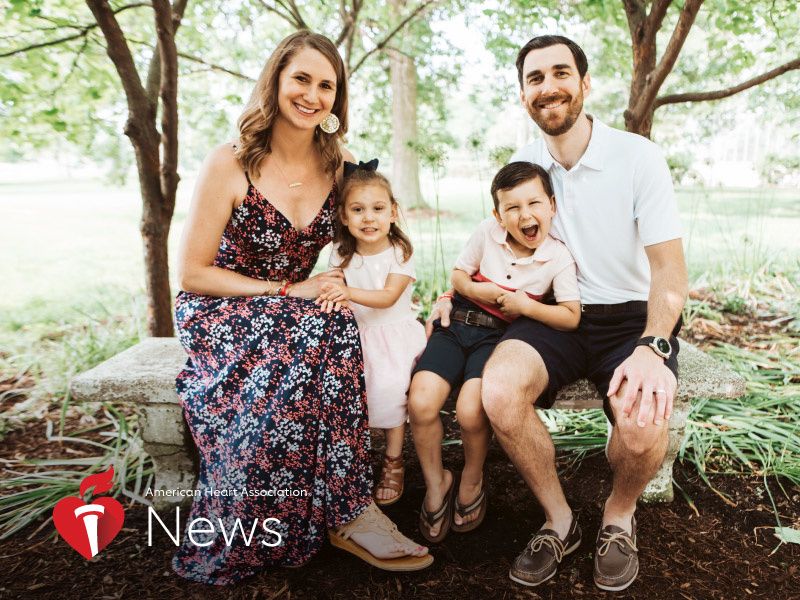 Jessica Grib noticed being a lot more tired with her second pregnancy. She felt winded easily and couldn’t catch her breath when lying down. Near her delivery date, she started having issues with high blood pressure. At 36 weeks, her blood pressure remained high enough – even with medicine – that doctors ordered her on bed rest.

Her daughter, Amelia, was born a week later. It almost cost Jessica her life.

Because Amelia was breech, not in the head-down position, doctors ordered a caesarean section. Everything was OK until Jessica reached the recovery room.

“Her oxygen levels plummeted, and her heart rate was all over the place. They couldn’t stabilize it,” said her husband, Kevin. “That’s really the first indication that something was really going wrong.”

Jessica was taken to intensive care and “essentially the bat signal went out to all the cardiologists in the building” to get to the ICU, Kevin said. Eventually, doctors sent Jessica to the cardiac catheterization lab so they could get a good look at her heart.

Along the way, Jessica stopped breathing. It took six people and 10 minutes to resuscitate her.

Doctors determined her heart’s blood flow could not meet the demand of her body’s organs for oxygen. The condition is called peripartum cardiomyopathy, an uncommon form of heart failure that happens during the last month of pregnancy or up to five months after giving birth. Doctors put Jessica on a ventilator and implanted a device in her heart to keep her blood pumping. She was stabilized and transferred to another hospital with specialized equipment to keep her alive.

The doctor told Kevin that basically Jessica’s heart had to start working on its own within two weeks.

“He really laid out that this was going to be an incredible uphill battle, and even if we got her back, there was a small chance we would get her back in a fully functioning state,” Kevin said.

Lots of people showed up at the hospital to make sure they could see Jessica, who was 30 at the time.

After a couple of days, family members noticed an occasional blip on her heart monitor. Eventually, the blips turned into more regular beating.

“My heart was recovering itself, which is pretty amazing,” Jessica said.

Doctors were able to wean Jessica from the life support machine after about five days, but her vital signs were still troubling. Jessica’s blood pressure was still high, and her heart rate was all over the place. After about two weeks, her vital signs stabilized and she awoke from the heavy sedation to be reunited with Amelia and her toddler, Noah.

Jessica pushed herself in physical and occupational therapy. It paid off. Three weeks after the roller-coaster journey began, Jessica went back to her home in St. Louis.

Recovery took time. At first, she couldn’t walk long distances or hold Amelia’s pacifier because of difficulty with fine motor skills. On top of that, she had excruciating headaches. Jessica wasn’t sure what her life was going to be like.

During a post-op hospital visit, Jessica bumped into her cardiologist. The doctor was puzzled why Jessica wasn’t getting better and suggested testing her for a rare tumor.

Sure enough, a tumor was found next to her adrenal gland. While scary, the doctor assured her this could be the answer to everything. Removing it could get her life back.

“It was extremely dangerous, high-risk, because the tumor secreted all this adrenaline into my body and made my heart stop the first time,” Jessica said.

Since then, she has worked to spread awareness about peripartum cardiomyopathy. The signs are often dismissed as ordinary pregnancy or postpartum symptoms. They include fatigue, a rapid heartbeat or palpitations, increased nighttime urination, shortness of breath with activity and when lying flat, swelling of the ankles, swollen neck veins, and low blood pressure or blood pressure that drops when standing. “I had a baby in America in a hospital in 2016, so I had no idea that I would have been fighting for my life,” said Jessica, who was otherwise healthy and exercised into her third trimester. “I had never heard of this before with either of my pregnancies.”