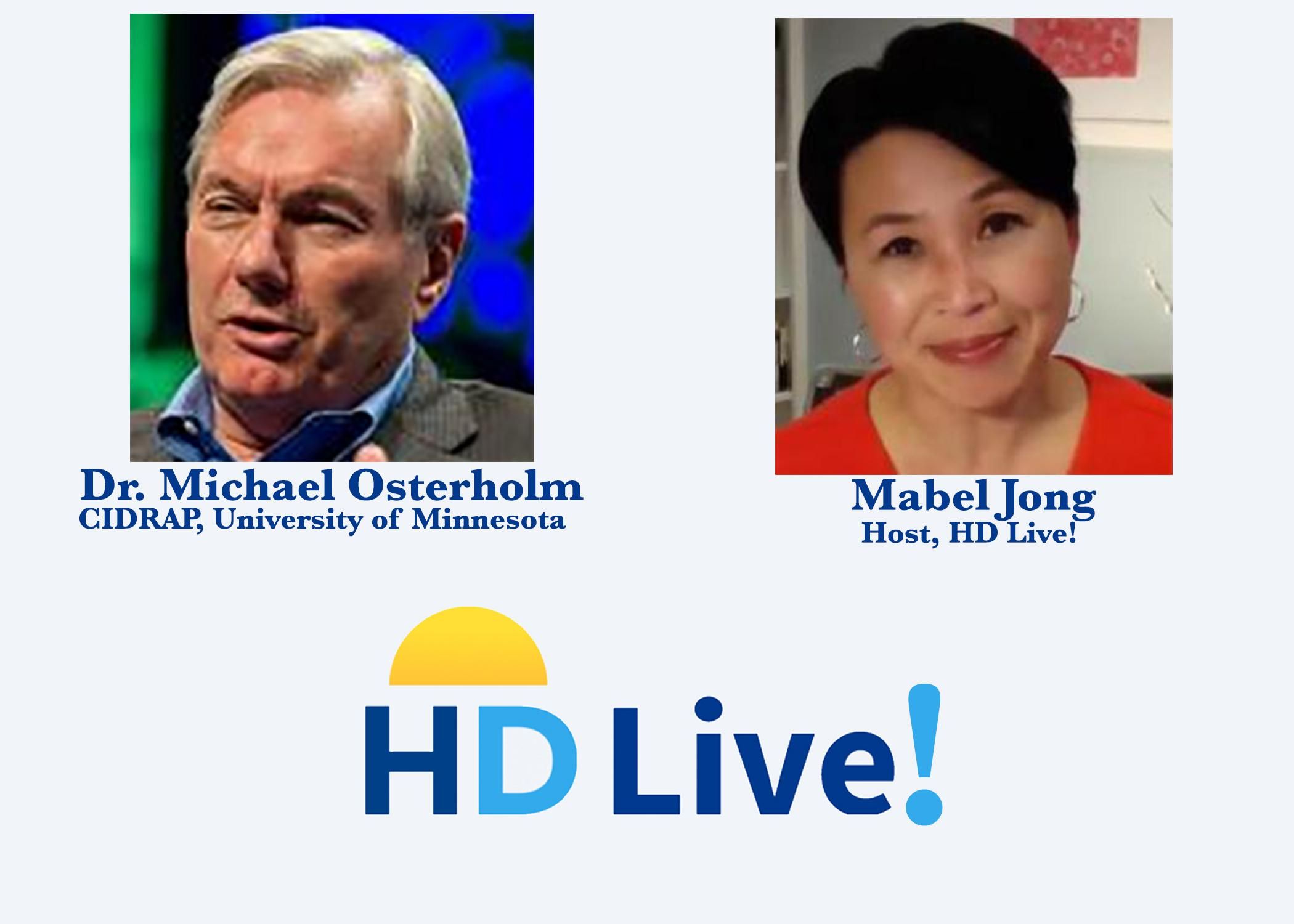 U.S. President Joe Biden has promised to re-energize the nation’s response to COVID-19, but one of his top pandemic advisors says that effort could be hamstrung by both the virus and the failings of the previous administration.

Michael Osterholm, director of the Center for Infectious Disease Research and Policy at the University of Minnesota, said he’s particularly worried about new coronavirus variants that could cause cases to surge and potentially evade the immune protection afforded by COVID-19 vaccines.

On top of that, the new Biden administration will need to fix a very shaky system for distributing existing and upcoming COVID-19 vaccines, one that has led to a severe lag in getting shots into people’s arms, Osterholm said during an HD Live! interview.

“I am extremely worried about the U.K. variant,” Osterholm said, noting that it is associated with much higher transmission. “I think over the course of the next six to 12 weeks, we could see the darkest days of this pandemic in this country, with that variant being responsible for greatly increased transmission.”

Osterholm also is worried about new variants reported from South Africa and Brazil, which might “actually have mutations that may in fact compromise the protection we get from the antibody from a vaccine.”

“At this point, we don’t have any compelling evidence that has happened, but there’s enough circumstantial evidence to make us very concerned that there could be some lesser impact from the vaccines because of that particular variant,” Osterholm said.

If these variants do dodge vaccine immunity, researchers “may very well end up finding ourselves thinking about altering these vaccines somewhat, much like we do with influenza vaccines each year, to try to adjust to these new variants if in fact that continues to be a problem,” Osterholm said.

Right now, the main focus is on helping distribute the vaccines, Osterholm said. There have been reports of widespread frustration from people who want to get vaccinated but can’t navigate the systems in place to sign up for a shot, which vary from state to state.

“Every effort will be made to support the state and local health departments and all those who are working on the front lines to deliver the vaccine,” Osterholm said. “The previous administration really had not done any meaningful work in terms of laying out that last mile and that last inch, meaning actually getting people vaccinated. So you’re going to see a much greater effort in actually making sure once those doses are manufactured, they’re quickly put into people’s arms.”

Part of the problem is that demand simply is outrunning supply. Accounts of large stores of unused vaccine are “misleading,” while reports meant to detail the number of doses distributed often “reflects what Operation Warp Speed has allocated to you, and it’s not even in your state yet,” Osterholm said.

“Eventually, I think you’re going to find that every day that a dose of a vaccine arrives somewhere in the country, it’s going to be within hours — maybe a day or two — and it will be in someone’s arm,” Osterholm said. “That is going to happen quickly.”

These supply problems are exacerbated by the lack of a national scheduling tool that would give people an honest idea of when they might expect to get the vaccine.

“At this time I’m not aware of a national scheduling tool, as such. It’s surely a technological issue that should have been addressed long before the vaccine rollout occurred. As you see, these systems being set up around the country by states, they probably will unfortunately become the norm for the short term,” Osterholm said.

“Potentially down the road, several months from now, there will be more of a national approach to this, but in the short term it’s going to be very tough to develop a national sign-up system for vaccines that is going to be effective,” he continued. “We’re going to have to rely on what’s going on at the local and state level.”

Returning to even an altered state of normality in the United States likely won’t happen until mid- to late summer, “but there’s one caveat to that, and that is how well that vaccine will be received,” Osterholm said.

“Right now, we’re reporting even in health care settings, 30% or more of health care workers are taking a pass on the first dose of the vaccine because they’re concerned about safety,” Osterholm said, adding that these concerns are “understandable” because a poor job has been done explaining the vaccines and their development.

For example, steps were taken to ensure no short cuts were made on assessment of the vaccines’ safety and effectiveness, but those steps have not been clearly explained, Osterholm said.

People also haven’t been provided clear messaging on the messenger RNA vaccines, Osterholm added. For example, some are concerned that the vaccine would somehow alter their personal genetics, which isn’t true.

“We’ve not done a good job of [easing these concerns] at all, so if we come around to mid-summer and we’ve not improved on the uptake of the vaccine by citizens throughout all the country, I think we’re going to be in real tough shape in terms of trying to get back to even a new normal,” Osterholm said.

The U.S. Centers for Disease Control and Prevention has more about COVID-19 vaccines.