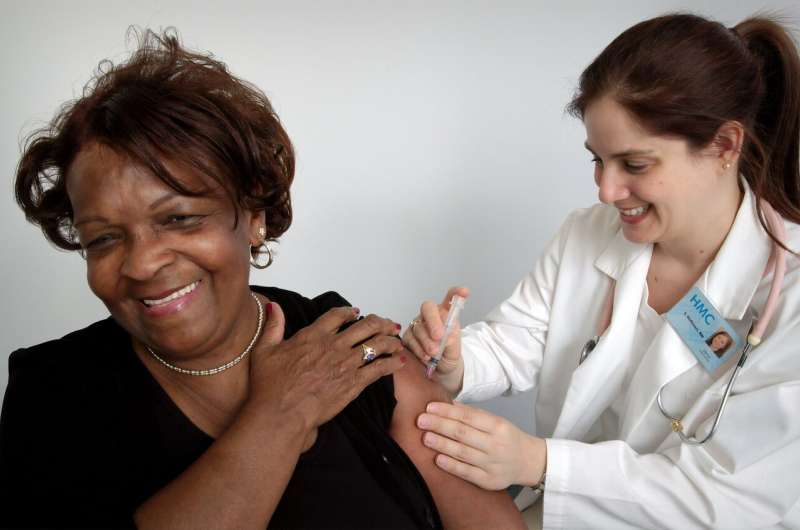 Name a COVID vaccine conspiracy theory circulating on social media, and hair stylist Katrina Randolph has heard it. So every time a client slides into her chair, she snips away at fears and misconceptions.

No, the vaccine isn’t an effort to sterilize Black people. It can’t alter your DNA. It won’t implant a microchip to track your movements. And no, people of color are not being used as guinea pigs.

Randolph has put herself on the front lines of the Black community’s fight against COVID vaccine misinformation, part of a network of barbershops and beauty salons working with Dr. Stephen B. Thomas, who runs the Maryland Center for Health Equity at the University of Maryland School of Public Health.

The Health In-Reach and Research Initiative—or HAIR—used to focus on educating people about chronic diseases such as diabetes and colon cancer, Thomas says.

Now it’s taking on something just as dangerous and more insidious: Viral misinformation about COVID-19 vaccines that is contributing to Black Americans getting vaccinated at a much lower rate than white Americans.

Take misinformation that swirled around Hank Aaron’s death. In early January, the baseball great got publicly vaccinated with civil rights leaders in Georgia to reassure Black Americans the shots are safe.

“I was proud to get the COVID-19 vaccine earlier today at Morehouse School of Medicine,” he wrote in his final tweet. “I hope you do the same!”

Seventeen days later when Aaron died at the age of 86, anti-vaccine activists linked his death, without evidence, to the coronavirus vaccine. The Fulton County Medical Examiner’s office determined Aaron died of natural causes, but not before falsehoods and doubts ricocheted all over social media.

“Our communities have been marinating in this disinformation for months,” Thomas said. “We have got to be in this space. We can’t cede this space to purveyors of disinformation. We are going to have to save ourselves.”

In Randolph’s Capitol Heights, Maryland beauty salon, tall tales told on Facebook and Twitter don’t stand much of a chance against an arsenal of medical facts, as she gently coaxes clients to bare their shoulders for the shot.

“At first, 75% of my clients were saying, ‘I’m not going to get the vaccination.’ But as we had these conversations and I told them things that I was being educated about, they began to do research and then they felt more comfortable with the vaccination,” Randolph said. “Now I hear from 90% of my clients, ‘I can’t wait to get vaccinated.'”

A history of distrust earned over time

False and misleading information is not the only—or even the main—factor in vaccine hesitancy.

Black people are wary of a racially biased health-care system that has long ignored and mistreated them and harbors a dark history of medical experimentation, often without consent, says Dr. La Tanya Hines, a Los Angeles obstetrician and gynecologist.

Her patients cite the Tuskegee Syphilis Study, which denied Black men treatment to study the disease’s progression, and the case of Henrietta Lacks, a Black woman whose cancer cells were used for research without her permission.

“From an African-American standpoint, we have plenty good reasons to be a bit distrustful of the American health-care system,” said Hines, a Los Angeles obstetrician and gynecologist who has seen first-hand the harmful impact of misinformation and disinformation campaigns on the Black community.

There are other hurdles. Fewer spots to get vaccinated in predominantly Black communities. Residents from white neighborhoods claiming vaccine appointments in Black neighborhoods.

Another culprit is the digital divide, with vaccine registration systems mostly online. Access to reliable information on the safety of the vaccines and where to get them is also not distributed equally, not even on Facebook.

But social media misinformation plays a particularly harmful role in spreading fear about the vaccines, said Neil Johnson, a professor of physics at George Washington University who studies online extremism.

“It plays on fears about people needing to protect themselves against an unknown evil. That evil may be the ‘system,’ not just COVID itself. And that system could be the existing health infrastructure and guidance which is not geared to Black American interests,” he said.

Even as polls show confidence in the vaccines has increased among Americans overall, confidence among African Americans is lower than other demographic groups. And that alarms the Biden administration.

“If you think about what it is to have 400 years in this country (since slaves first arrived in the US) being marginalized and minoritized, you can imagine the distrust you would have in the system,” Dr. Marcella Nunez-Smith, recently appointed to lead a new federal task force on coronavirus inequities, told the Financial Times. “There are actors out there trying to take advantage of that with misinformation about the vaccines, especially among some of the communities that have been hardest hit.”

Since the vaccines began rolling out, social media companies have become more aggressive in curbing the flood of misinformation, including false statements such as vaccines are being used to cause people harm.

But new threats emerge daily as anti-vaccination activists sidestep these prohibitions to undermine the public’s confidence in the vaccines with baseless accounts of people dying or suffering crippling side effects including disfigurement.

This week, health-care professionals say they are bracing for the release of anti-vaccine crusader Robert F. Kennedy, Jr.’s documentary “Medical Racism: The New Apartheid,” which could stir more vaccine fears in the Black community.

Throughout the pandemic, Kennedy has made misleading and baseless claims about vaccines, some targeted at the Black community. Earlier this month, Instagram took down his account which had 800,000 followers “for repeatedly sharing debunked claims about the coronavirus or vaccines.”

“The high levels of medical mistrust in the Black community is a rational response to routine callousness and systemic savagery toward Blacks by medical professionals and pharmaceutical interests,” Kennedy, chairman of the nonprofit Children’s Health Defense, said in a statement.

Angela Rasmussen, a virologist at Georgetown University, also condemned the documentary and warned of dangerous, even lethal, consequences.

“Medical racism absolutely exists, and underlies the disproportionate impact on the COVID-19 pandemic on the Black community. But correcting those disparities by claiming vaccines contribute to medical racism? That’s much, much worse,” she wrote on Twitter.

“You know what the result of discouraging Black people from getting the COVID-19 vaccine will be? More preventable deaths in the Black community.”

From vaccine skeptic to advocate

Preventable deaths are top of mind for Mike Brown, who runs a barber shop in Hyattsville, Maryland. He says he was once a vaccine skeptic, too. Then people around him started dying.

A year ago, vaccine misinformation was already circulating in his mostly Black county with the state’s highest number of COVID-19 cases. A flyer handed out in April 2020 falsely claimed the coronavirus was a government cover-up for 5G networks irradiating and killing people.

“The 5G will also give the government access to your information and your location through a RFID chip in the vaccine said to immunize you. You will lose all rights to privacy, bank and personal info. Don’t take the vaccine!!” it read.

With African Americans dying at twice the rate of white Americans, Brown set aside his fears and researched the science. In November, he began encouraging his clients to do the same.

A neighborhood barber wears a lot of hats, Brown says. Sometimes he’s a marriage counselor or a fashion consultant.

Now he’s a misinformation fighter, too, wrapping his clients in a protective cape for a fade and a shave while he battles lies with science.

He says he asks everyone in his chair the same thing: “If the vaccine is Plan A to stop the coronavirus from spreading and devastating our community, and you don’t plan to take it, what is your Plan B?”

The question which stumps many of his clients has gotten some of them to come around, Brown says. “It went from, ‘I’m not going to be the first one to get vaccinated,’ to ‘I’m going to get the shot as soon as they get it in my community.'”