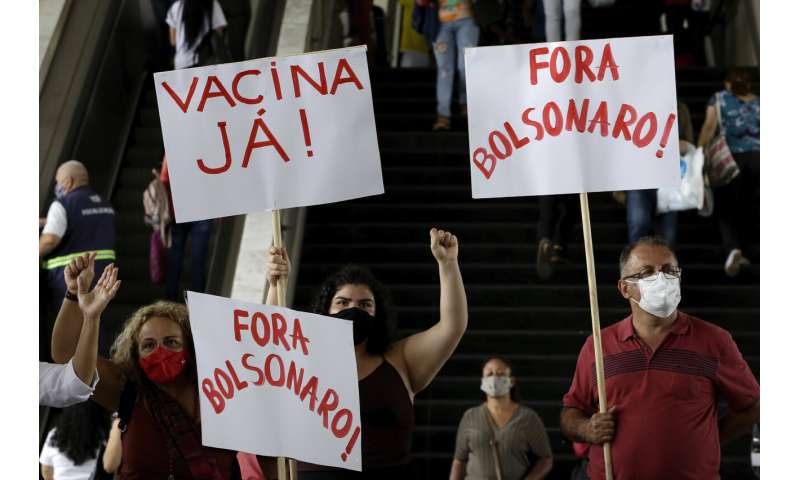 Brazil, a nation proud of its role as a regional leader in science, technology and medicine, finds itself falling behind its neighbors in the global race for immunization against a pandemic that has already killed nearly 200,000 of its people.

Latin America’s largest nation, long heralded for its domestic vaccine development programs, appears to be at least three or four weeks away from launching any formal immunization campaign against COVID-19. In contrast, Argentina, Chile, Mexico, Costa Rica and other countries in the region have already begun giving shots to their populations.

The Brazilian government has not approved a single vaccine and has stumbled in attempts to acquire even syringes and needles for an immunization effort that, as of the new year, still had no definite rollout date.

Meanwhile, the number of new coronavirus infections in the country reached a new high in December—peaking with more than 70,000 cases on Dec. 16.

The lightning rod in Brazil’s vaccine debate is President Jair Bolsonaro, who has cast skepticism on all of the vaccines being developed even as his government negotiates to obtain them. He has said he doesn’t plan to get a shot himself and joked at one point that side effects might turn people into crocodiles or bearded ladies.

“No one is saying that Bolsonaro really believes this, but he is discrediting the vaccine,” said Walter Cintra, a professor in health management at the Getulio Vargas Foundation university in Sao Paulo. “When the government behaves like this, it loses credibility. And these are million-dollar contracts.”

One of the earliest vaccines on the horizon appears to be one developed by China’s Sinovac company, which has contracted with the government of Brazil’s largest state, Sao Paulo, for distribution and production.

Sao Paulo Gov. João Doria announced plans to start distributing shots on Jan. 25 if federal health authorities approve the vaccine. Doria is a vocal critic and likely challenger in the 2022 presidential election, and his announcement added pressure on the Bolsonaro administration to come up with its own federal immunization plan.

The president initially sneered at the Chinese vaccine, saying its origins don’t inspire trust, but other states quickly showed interest in acquiring some.

Another contender for early release nationwide is likely to be the vaccine developed by AstraZeneca and Oxford University, which could be available by early February once regulators approve it, according to Brazil’s state laboratory Fiocruz, which is producing it in Brazil.

Fiocruz is one of Brazil’s largest public laboratories for vaccine production, including measles, polio and yellow fever. Relying on advanced technology and Fiocruz’ ability to produce at a low price, Brazil is the world’s biggest manufacturer of yellow fever vaccines, exporting millions of doses to dozens of countries worldwide, according to Fiocruz information.

Fiocruz said it expects to have 100 million of domestically produced COVID-19 doses by the end of July. Two doses are needed.

The government also expects an additional 42 million doses from the global vaccine partnership known as COVAX, with no set date, and has signed a memorandum with Janssen, a Johnson & Johnson subsidiary, for 38 million doses of its single-shot vaccine when it becomes available.

The government has struggled to reach a deal for the first vaccine approved globally, the Pfizer-BioNTech shot. Pfizer complained in late December of Brazil’s regulatory hurdles, while Bolsonaro expressed surprise that pharmaceutical companies did not show more eagerness to sell to a nation of roughly 210 million people.

Tensions seemed to wane in a meeting between regulators and Pfizer on Dec. 30, during which officials said they would simplify protocols and Pfizer said it would consider applying for emergency use approval. The Brazilian government and Pfizer earlier signed a memorandum of understanding for 70 million doses, according to information from the health ministry.

For Cintra, the professor in health management, the confusion over the COVID-19 vaccine approval is symptomatic of this administration’s chaotic handling of the pandemic, during which Bolsonaro has repeatedly denounced local officials’ efforts to impose social distancing rules and described the virus as a “small flu”.

“This is not about Anvisa (the regulator), or excessive regulation. It’s about the federal government systematically sabotaging the fight against the pandemic, or completely destroying the Brazilian health system,” he said.

Cintra noted that a public tender to acquire over 330 million syringes and needles for the government’s COVID-19 vaccination campaign resulted this week in bids for only 8 million units within the acceptable price range—less than 3% of what was required.

The Ministry of Health said in a statement that it would keep the tender open.

“There is a real risk of having a vaccine but not enough needles and syringes,” warned Carlos Eduardo Lula, president of a council of state health secretaries.

The head of Brazil’s bar association, Felipe Santa Cruz, told the newspaper Valor that further delays in the vaccination program could lead the association to draft an impeachment request against Bolsonaro.

For physics teacher Francisco Ferreira, 55, hope for a vaccine any time soon is fading.

“Brazil is getting a mix of bad faith and incompetence on the vaccine issue,” Ferreira said as he walked through the Sao Paulo international airport. “There are serious administrations around the world giving out the shots, but this isn’t our case.”