Breakfast Timing Could Affect Your Odds for Diabetes

Breakfast Timing Could Affect Your Odds for Diabetes 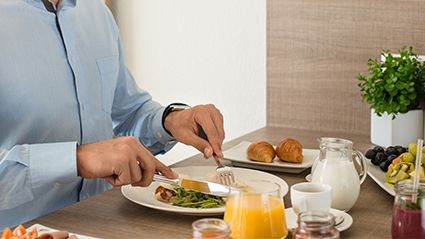 Could the time you eat your breakfast determine your health?

Yes, suggests new research that finds eating your morning meal before 8:30 a.m. may reduce your risk for developing type 2 diabetes.

The new findings held regardless of whether people restricted their eating to less than 10 hours a day or spread it out over windows of more than 13 hours.

Such time-restricted feeding is a form of intermittent fasting, which is all the rage these days due to a laundry list of potential health benefits ranging from weight loss and lower risk for disease to longevity. People who practice time-restricted eating typically eat during an eight to 12-hour daytime window and fast during the remaining 12 to 16 hours.

However, the new study suggests it is not the duration of the window, but the timing of the meals that may matter most when it comes to diabetes risk.

“Timing is what’s important, and earlier seems to be better,” said study author Kristen Knutson, an associate professor at the Center for Sleep and Circadian Medicine at Northwestern University’s Feinberg School of Medicine in Chicago. “Our ability to process the food we eat works better in the morning.”

To find out if the duration of the window or the timing of the meals was more important, researches divided more than 10,570 adults from the National Health and Nutrition Examination Survey into three groups based on their windows of eating (less than 10 hours, 10-13 hours, and more than 13 hours per day). Participants were further sorted by the time of day that they began eating — whether before or after 8:30 a.m.

And the study found it was the timing, namely earlier breakfasts, that made the most difference in insulin resistance and blood sugar levels, though only an association was seen.

The next step is to see if earlier windows of time-restricted fasting, say 8 a.m. to 4 p.m., promote greater benefits, Knutson said. “Indeed, earlier time-restricted feeding may be better than later, and the next step would be an intervention to test whether moving the feeding [even] earlier in the day has beneficial effects,” she said.

Knutson practices what she preaches. She wakes up every day around 7 a.m. and eats breakfast. “On days that I consider skipping breakfast, I don’t because of studies like these,” she said.

The study didn’t look at what people ate for breakfast, but it stands to reason that healthier choices such as whole-grain cereals unlock even greater benefits, Knutson said.

The study will be presented this weekend at the Endocrine Society’s virtual annual meeting. Such research is considered preliminary until published in a peer-reviewed journal.

Krista Varady, a professor of nutrition at the University of Illinois in Chicago, studies intermittent fasting, including time-restricted fasts.

The new findings make sense, said Varady, who was not involved with the research. “You are better at processing glucose or blood sugar early in the morning, and this ability wears down as the day goes on,” she said.

There are benefits seen with time-restricted feeding on weight, diabetes risk and other diseases. And “there may be even more benefit to earlier windows, say 8 a.m. to 4 p.m. versus 12 p.m. to 8 p.m.,” Varady said.

But these earlier windows may not work well within many people’s lifestyles, she said. “No one really wants to skip dinner, so it may not be so appealing,” Varady said. “If you eat earlier, it’s probably better for you, but it’s highly unlikely that people will want to shut the window that early.”

If you can’t maintain this way of eating, the benefits will be lost, Varady said.

Are you at risk for diabetes? Take this 60-second quiz from the American Diabetes Association.