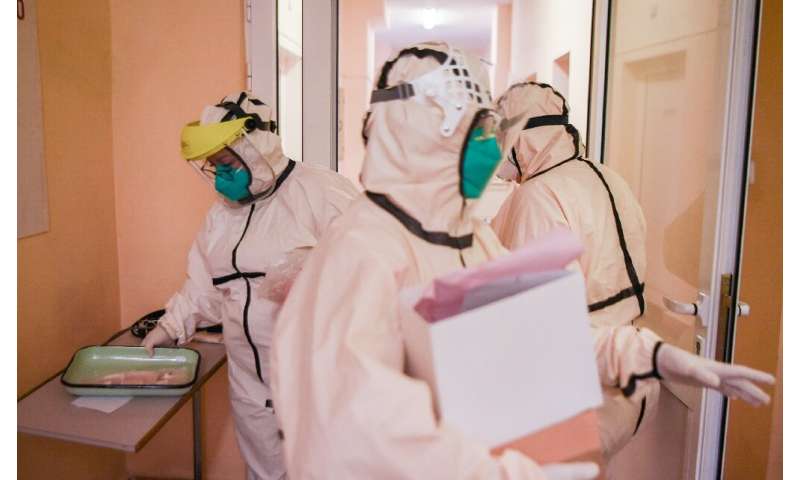 With just one doctor and three nurses for every 55 seriously-ill coronavirus patients, staff in the hospital in the eastern Bulgarian city of Shumen say they are at the end of their tether.

“The situation is critical,” says Dimitar Kostov, the head of the Shumen hospital, the most overloaded in the country.

As a second wave of the pandemic engulfs the country of just under seven million, staff reinforcements in hospitals are in short supply as the shortcomings of the healthcare system are cruelly laid bare.

In the region around Shumen, for example, half of the medics are nearing pension age and more people leaving the system than coming in.

“We’re collapsing from physical and mental exhaustion,” says the head of the infectious diseases ward Albena Kostov as she hurries between patients’ rooms in her white scrubs to the incessant beep and buzz of alarms.

Not a single bed is left unoccupied in the entire hospital.

While the EU’s poorest state managed to avoid the worst of the first wave of the pandemic in the spring by imposing shutdown measures, the government has refused to take similar action this time round.

Nearly 4,500 coronavirus patients are currently hospitalised and 270 people are in intensive care.

According to data from the Bulgarian Doctors’ Union, eight out of ten medicine graduates leave Bulgaria to seek better-paid careers in western Europe, a trend that has worsened since EU accession in 2007.

As a result, 52 percent of the medical staff in the country are aged over 55 compared to a mere 14 percent under 35.

The situation in Shumen is dire, where “40 percent of doctors are over 60 years old,” says Krasimir Simeonov, chief of the regional medical workers’ union which has shrunk by a third since 2000.

Low salaries and meagre pensions mean those medical staff who do stay in the country often work long past retirement age.

“A doctor’s basic salary is 840 leva (430 euros, $500) per month and a nurse gets 600 to 700 leva,” says Rumyana Nanovska, head of the municipal hospital in the northern town of Lovech which almost went bankrupt even before the crisis.

‘As long as they draw breath’

The government has promised hefty bonuses for medics on the front line.

But many elderly doctors and nurses are worried about being exposed to the virus.

A total 3,459 medics have so far been infected with the virus in Bulgaria, and at least 25 have died.

“Doctors work as long as they draw breath,” a 77-year-old neurologist told the bTV television station earlier this year when asked about his decision to return to work on the Covid-19 ward.

He died of the virus in June.

In another tragic case, three medical workers in the same family died from coronavirus within days of each other in September in the southwest of the country.

Understandably panicked, staff at a hospital in the eastern town of Preslav—all of whom were aged 65 or over and had pre-existing medical conditions—threatened to resign en masse when it was announced a coronavirus ward would be opened.

As a result, their patients were sent to Shumen, adding to the overcrowding.

In addition to the ever-thinning ranks of healthcare workers, the country’s medical system faces other problems.

Bulgaria enjoys one of the highest number of dentists per capita on the continent, but other specialists needed to deal with the pandemic—such as anaesthetists and pulmonologists—are in short supply.

While daily demonstrations against corruption from earlier this year have largely been called off, there have still been smaller protests over the government’s perceived bungling of its handling of the pandemic.

Police minivans have been rushing people to hospitals due to a shortage of ambulances and hospital chiefs have called on medical students and other volunteers to help.

“The system has serious shortcomings,” a young doctor Dimitar Lund recently told public BNT television—on his last working day in Bulgaria before leaving for a new job in Stuttgart, Germany.