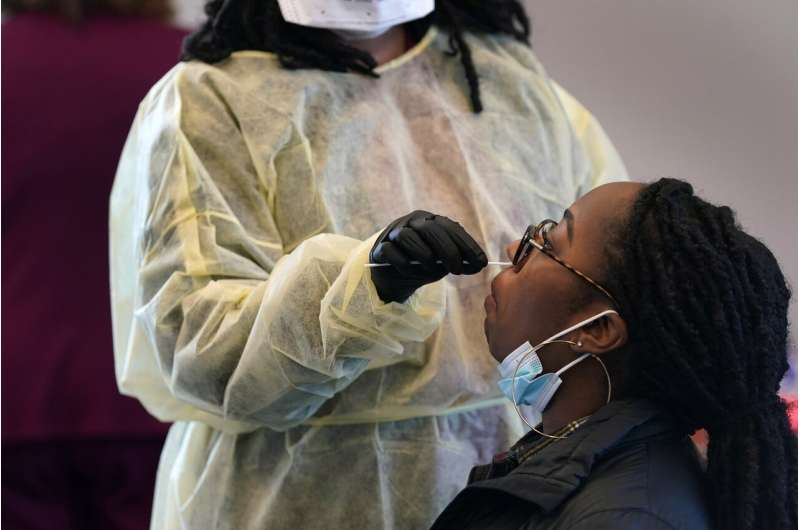 When a Halloween party sparked a COVID-19 outbreak at North Carolina Agricultural and Technical State University, school officials conducted rapid screening on more than 1,000 students in a week, including many who didn’t have symptoms.

Although such asymptomatic screening isn’t approved by regulators and the 15-minute tests aren’t as sensitive as the genetic one that can take days to yield results, the testing director at the historically Black college credits the approach with quickly containing the infections and allowing the campus to remain open.

“Within the span of a week, we had crushed the spread. If we had had to stick with the PCR test, we would have been dead in the water,” said Dr. Robert Doolittle, referring to the polymerase chain reaction test that is considered the gold standard by many doctors and Food and Drug Administration regulators.

With President Joe Biden vowing to get elementary and middle school students back to the classroom by spring and the country’s testing system still unable to keep pace with the spread of COVID-19, some experts see an opportunity to refocus U.S. testing less on medical precision than on mass screening that they believe could save hundreds of thousands of lives. As vaccines slowly roll out, they say the nation could suppress the outbreak and reopen much of the economy by easing regulatory hurdles to allow millions more rapid tests that, while technically less accurate, may actually be better at identifying sick people when they are most contagious.

The U.S. reports about 2 million tests per day, the vast majority of which are the slower, PCR variety. The initial tests developed to detect COVID-19 all used the cutting-edge technique, which quickly became the standard at U.S. hospitals and labs. It also became the benchmark for accuracy at the FDA, which has greenlighted more than 230 PCR tests but only about a dozen rapid tests. Priced as low as $5, the quick tests look for viral proteins, which are generally considered a less rigorous measure of infection.

The FDA said in a statement it supports “innovation in testing” and “has not hesitated” to make rapid tests available.

But most experts agree that the current U.S. system, which relies heavily on lab testing, is still incapable of containing the virus that is killing more than 3,000 Americans per day and has pushed the country’s death toll to nearly 460,000.

Compounding the problem is that an estimated 40% of people infected don’t develop symptoms. It’s among these silent spreaders that Mina says rapid tests have the clear advantage over lab tests. With its medical precision, he argues that the PCR test continues to detect COVID-19 in many people who have already fought off the virus and are no longer contagious. The rapid test, while less sensitive, is better at quickly catching the virus during the critical early days of infection when it can spread explosively through communities.

The case for widescale rapid testing is getting a boost from universities and school systems that have used the approach to stay open through the latest waves of the pandemic. And proponents point to apparent success stories like the small European nation of Slovakia, which saw infections drop after screening two-thirds of its roughly 5 million people with the tests.

But many lab specialists worry about vastly expanding the use of rapid tests, which are more prone to false results, and have never been used at the massive scale being proposed.

“There’s a lot of people trying to portray things as black and white, and there’s a lot of gray here, unfortunately,” says Susan Butler-Wu, of the University of Southern California’s Keck School of Medicine.

She points out that testing campaigns in Slovakia, the U.K. and elsewhere have been paired with strict lockdown orders. Without such measures in the U.S., critics say there is no way to predict whether people who test positive will self-isolate.

That’s a particular worry with proposals from Mina and others to blanket the U.S. in millions of rapid, home tests that would allow people to regularly screen themselves without medical supervision.

One area where consensus may be emerging is in public schools, where many parents and districts are eager for a return to in-person instruction. Biden has proposed spending $50 billion to vastly expand rapid testing as part of his push to return most K-8 students to classes within his first 100 days.

One of his first executive orders called for using the Defense Production Act to scale up supplies needed for rapid tests. And key members of his administration, including the new surgeon general and head of the Centers for Disease Control and Prevention, vigorously support a revamped testing strategy focused on such screening. This week, the White House said it enlisted six manufacturers to mass produce the tests, with the goal of providing 60 million by the end of the summer.

Biden’s team has been in discussions with the nonprofit Rockefeller Foundation, which has outlined a plan to use 300 million tests per month to return most U.S. students to the classroom beginning in March.

The initial results from a new pilot study in six city school systems give an early glimpse of the potential opportunity and pitfalls.

Weekly screening of teachers, students and staff appeared to reduce infections by 50%, according to the study commissioned by the foundation, which is coordinating the effort. That’s a bigger impact than requiring students and teachers to wear masks when not eating but less effective than enforcing social distancing, the study found.

It also flagged major logistical challenges, including schools that faced difficulty providing the staff, technical expertise and community outreach needed to roll out their testing programs.

“People are doing it and it’s possible, but it’s not easy,” said Andrew Sweet, a managing director with the foundation.

Citation:
Calls grow for US to rely on rapid tests to fight pandemic (2021, February 6)
retrieved 7 February 2021
from https://medicalxpress.com/news/2021-02-rapid-pandemic.html