Could Taking a Swing at Golf Help Parkinson’s Patients?

Could Taking a Swing at Golf Help Parkinson’s Patients? 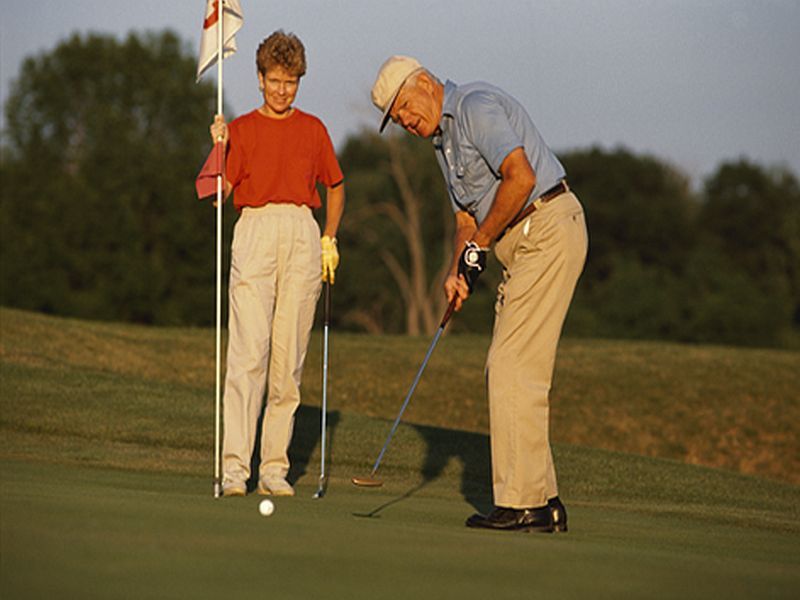 “Exercise is well-known to treat the symptoms of Parkinson’s disease,” said study author Dr. Anne-Marie Wills, noting it helps to improve gait, balance and fatigue, while offering a measure of depression relief. Several human and animal studies have also raised the prospect that exercise could help slow disease progression as well, she added.

But many Parkinson’s patients fail to engage in therapeutic activities. And “there are almost no randomized trials comparing different types of exercise in PD,” said Wills, an assistant professor of neurology at Harvard Medical School.

To see how golf stacks up against tai chi, her team focused on 20 patients whose disease was characterized as “moderate.” None had previously played golf or practiced tai chi.

Eight were offered a 10-week golf class that met twice weekly for an hour. The other 12 underwent tai chi training for the same amount of time.

Standing and walking tests were conducted before and after the training classes, with each patient timed to see how long it took to rise from a chair, walk 10 feet, return and sit down again. The result: Post-study the tai chi group performed the full exercise about a third of a second slower than at the study’s start. But the golf group was nearly 1 second faster.

Wills said she was not particularly surprised by the finding because, anecdotally, “I had observed that people with Parkinson’s disease who golf regularly seem to have better outcomes.”

The study found a “statistically significant improvement” among the golf group, and also determined that golf was at least as safe and effective as tai chi.

“While both interventions focus on balance, participants in the golf arm seemed to enjoy the exercise more, which may help to explain the greater improvement,” said Wills, who also directs the CurePSP Center of Care at Massachusetts General Hospital in Boston.

Her takeaway: “While this was a small pilot study, we are optimistic that this could be a good exercise option for people with Parkinson’s. It was well-tolerated, safe and seemed to improve balance. We would like to perform a larger study to confirm our findings, but in the meantime, we would encourage people with Parkinson’s disease to practice their golf swing at a driving range for an hour a day, three times a week.”

James Beck is the chief scientific officer at the Parkinson’s Foundation in New York City. “While not a cure for people living with Parkinson’s disease, exercise is like a rising tide that can lift all boats,” he noted.

“For PD, exercise can ease symptoms of stiffness, improve movement, counter apathy and depression, and improve overall function,” said Beck, who wasn’t part of the study.

“Exercise often leads to increased strength and better balance,” he said, stressing that it all helps to minimize falls, a leading cause of death for those with Parkinson’s.

The Parkinson’s Foundation says patients who develop a consistent exercise routine early in the course of their disease are better able to slow declines in quality of life, compared with those who get active later on.

With that in mind, Beck suggested the overriding goal should be “less about finding the ‘right’ exercise and more about getting people to start moving and stay moving.

“The message is not that people should go out and start golfing,” he said. “But it is clear that if these results persist with a larger sample, people living with PD should find the exercise they like and keep doing it.”

The findings will be presented April 17-22 at a virtual meeting of the American Academy of Neurology. Data and conclusions presented at meetings are usually considered preliminary until published in a peer-reviewed medical journal.

Parkinson’s disease is only seen in people of advanced age.
See Answer