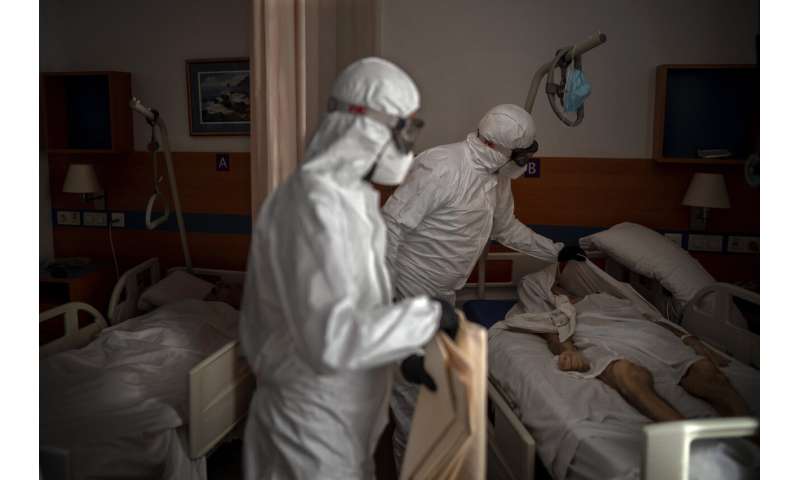 As the two mortuary workers pushed a stretcher with a bagged corpse out of the room, the elderly man in the adjacent bed briefly awakened from his dementia. “Is he dead?” he muttered, extending his arm, trying to touch his roommate for the last time.

Reflecting on a scene repeated too many times, one of the workers, Manel Rivera, despaired at the growing number of elderly people dying as the coronavirus resurges.

“The sad thing is,” he said of the surviving man in the Barcelona nursing home, “in a few days we’ll probably come back for him.”

Mortuary workers are again busy around-the-clock in nursing homes and hospices across Europe, amid outbreaks that this time are causing havoc mostly in facilities spared during the spring. In the U.S., patients in nursing homes and long-term care facilities and those who care for them have accounted for a staggering 39% of the country’s 281,000 coronavirus deaths.

The surge in Europe is happening despite the retaining wall of measures erected since the spring, including facilities tailored only for residents with coronavirus. It’s also pitching authorities and elder care professionals into a race against the clock before mass vaccinations can begin.

In response, Portugal has deployed military units to train nursing home staff in disinfection. In France, where at least 5,000 institutionalized elderly have died in the past month, and in Germany and Italy, where the summer respite has been followed by an upward turn since September, visits by relatives to nursing homes are being restricted again or banned altogether.

Most countries are ramping up screening of workers and residents, trying to prevent spread by asymptomatic virus carriers. The strategy has helped Belgium reduce nursing homes deaths from 63% of all COVID-19 fatalities before mid-June to 39% at the end of November.

But in Spain, where the pandemic has ignited a polarized debate on the country’s ability to care for Europe’s fastest-aging society, nursing home coronavirus deaths have been climbing for two months. They now make up roughly half of all new daily fatalities, a similar share as in March and April. New daily infections are also disproportionate in the homes—13 cases inside for every one outside.

There is reason for hope, however, as Britain became the first country in the world to authorize a rigorously tested COVID-19 vaccine last week, and could begin dispensing it within days, prioritizing nursing home residents and those who care for them, followed by other elderly and health care workers. Nursing homes are also at or near the top of the list for vaccines in the U.S., Spain and many other European countries.

“It’s a sensible, justified and logical measure” to prioritize nursing homes, said Miguel Vázquez, head of Madrid’s Pladigmare association of residents’ relatives. After a “shameful” death toll and a record of repeating mistakes, he said, “not doing so would be a deliberate death sentence.”

Some things have improved since the spring. Care workers have learned to make the best use of protective equipment and tests, which are no longer in such short supply. There’s a better grasp of what’s going on inside most facilities, and experts have learned how COVID-19 affects the elderly, with symptoms such as diarrhea and rashes that had been overlooked.

“It really is a chameleon disease that fools us all,” said Dr. José Augusto García Navarro, head of Spain’s Society for Geriatrics and Gerontology.

One of the gravest mistakes in the early days was to cloister the elderly in damaging isolation, García Navarro said, leading to loss of mobility, insomnia, malnourishment, depression and other ailments that affected and even killed many.

“It’s paramount to guarantee physio, occupational and psychological therapies for the infected,” he said. “That didn’t happen during the first wave and is not happening as it should during the second one.”

An initiative in Spain is trying to remedy that with facilities for recovering virus patients who, while remaining contagious, have nowhere to isolate or keep active. They come from their own homes or from the many small care facilities that have no way to separate residents.

At the Vitalia Canillejas Home in Madrid, Belkis Zoraida Cuevas, 83, is recovering from the virus, which has kept her away from her husband, 92-year-old Joaquín González, for the longest period in more than six decades of marriage.

“Oh my God! What a crisis of anxiety. How I’ve cried,” Cuevas said. “I’m doing better now, but this has been too much to handle. It’s like going to war without weapons.”

As he walked with the help of a therapist to recover lost mobility during a month-long hospitalization, 87-year-old Pedro Marcelo said: “I’m not afraid of dying, I just want to move a little bit better until the day for me to go arrives.”

A study of blood samples in all Madrid nursing homes showed that 53% of the 55,000 residents live in facilities where more than half of residents have developed antibodies.

“It’s sad to put it this way,” said Paz Membibre, who manages a dozen centers for the Vitalia Home group in or around the Spanish capital, “but the damage we suffered has protected us now.” How long immunity might last, however, is a question scientists are still trying to answer.

Meanwhile, across the continent, infections often shoot up to dozens or even over 100 in just a matter of 48 hours.

In Spain, the biggest surges of cases and deaths are now in the southern Andalucía and central Castilla León regions that dodged the worst during the spring. In neighboring France, infections are now more spread out than during the spring, when they concentrated in hot spots.

In Berlin, where 14 people recently died of coronavirus in a nursing home of 90 residents, city officials said strict rules were not being applied.

García Navarro said most of the affected facilities in Spain are trying to control the virus with staff shortages as care workers fall sick. In a few cases, he said, “they are still not complying with safety protocols.”

In a scathing report into how thousands were abandoned in nursing homes, many without medical treatment, in Madrid and Barcelona in the spring, Amnesty International said this week that some of the same problems still exist, including health protocols that recommend prioritizing the young over the elderly.

Bureaucracy and mismanagement have also played a role. An internal Spanish government analysis seen by The Associated Press lists 30 main errors that led to the deaths of over 20,000 elderly patients with COVID-19 before mid-May. But its recommendations are still being revised with regional officials, and some have not been implemented.