Expanded vaccine rollout in US spawns a new set of problems

Expanded vaccine rollout in US spawns a new set of problems 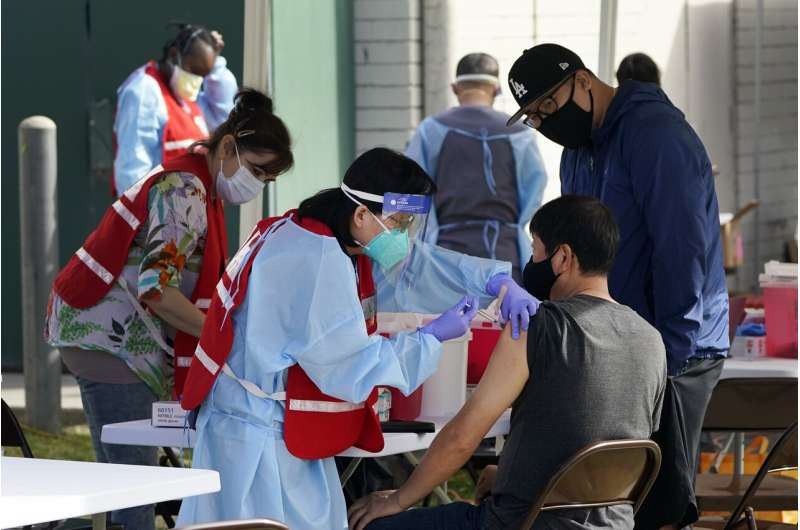 The rapid expansion of COVID-19 vaccinations to senior citizens across the U.S. has led to bottlenecks, system crashes and hard feelings in many states because of overwhelming demand for the shots.

Mississippi’s Health Department stopped taking new appointments the same day it began accepting them because of a “monumental surge” in requests. People had to wait hours to book vaccinations through a state website or a toll-free number Tuesday and Wednesday, and many were booted off the site because of technical problems and had to start over.

In California, counties begged for more coronavirus vaccine to reach millions of their senior citizens. Hospitals in South Carolina ran out appointment slots within hours. Phone lines were jammed in Georgia.

“It’s chaos,” said New York City resident Joan Jeffri, 76, who had to deal with broken hospital web links and unanswered phone calls before her daughter helped her secure an appointment. “If they want to vaccinate 80% of the population, good luck, if this is the system. We’ll be here in five years.”

Up until the past few days, health care workers and nursing home patients had been given priority in most places around the U.S. But amid frustration over the slow rollout, states have thrown open the line to many of the nation’s 54 million senior citizens with the blessing of the Trump administration, though the minimum age varies from place to place, at 65, 70 or higher.

On Thursday, New Jersey expanded vaccinations to people between 16 and 65 with certain medical conditions—including up to 2 million smokers, who are more prone to health complications.

The U.S., meanwhile, recorded 3,848 deaths on Wednesday, down from an all-time high of 4,327 the day before, according to Johns Hopkins University. The nation’s overall death toll from COVID-19 has topped 385,000.

More than 11.1 million Americans, or over 3% of the U.S. population, have gotten their first shot of the vaccine, a gain of about 800,000 from the day before, the Centers for Disease Control and Prevention said Thursday. The goal of inoculating anywhere between 70% and 85% of the population to achieve herd immunity and conquer the outbreak is still many months away.

Hard-hit Los Angeles County, the nation’s most populous county with 10 million residents, said it couldn’t immediately provide shots to the elderly because it had inoculated only about a quarter of its 800,000 health care workers.

“We’re not done with our health care workers, and we actually don’t have enough vaccine right now to be able to get done more quickly,” Public Health Director Barbara Ferrer said. “We haven’t heard back from the state about vaccine availability and how it would be distributed.”

Santa Clara County health officials said the county of 2 million people had only enough vaccine to inoculate people 75 and older, not the 65-and-older crowd.

In Mississippi, officials said new appointments will probably have to wait until a hoped-for shipment of vaccines in mid-February.

In South Carolina, Kershaw Health in Camden implored people not to call its hospitals or doctors to schedule vaccine appointments after receiving more than 1,000 requests in two days. State health authorities said their hot line got 5,000 calls on Wednesday.

Francis Clark said she tried repeatedly to schedule an appointment for her 81-year-old mother, who lives alone outside Florence, South Carolina, and doesn’t have internet access. But the local hospital had no openings on Wednesday, Clark said, and the other vaccination sites are too far away.

Allison Salerno, an audio producer from Athens, Georgia, said she spent the better part of a day calling her state’s health department to get a vaccine appointment for her 89-year-old mother.

“I started calling at 8:30 a.m. and on the 67th call I was finally put on hold,” Salerno said. “I had already pre-registered her two weeks before online, but I never received a confirmation.”

After Salerno had spent 65 minutes on hold, someone finally came on the line and gave her mother a Saturday appointment.

“My mother has not been out since the beginning of the pandemic,” Salerno said. “She’s a very healthy woman and she wants to go to the grocery store, she wants to get her hair done.”

Meanwhile, some states, like Minnesota, are waiting before throwing open the doors.

“As we learn more, we will work to make sure everyone who is eligible for a vaccine knows how, where, and when they can get their shots,” the state Health Department said in an email. “Everyone’s opportunity to get vaccinated will come; it will just take some time.”

Arizona, which had the nation’s highest COVID-19 diagnosis rate over the past week, will start signing up people 65 and older next week. It also plans to open a vaccination site at Phoenix Municipal Stadium in addition to the one dispensing thousands of shots daily at the home of the NFL’s Arizona Cardinals.

To step up the pace of vaccinations, South Carolina made a rule change allowing medical students, retired nurses and other certain professionals to administer the shots.

California lawmakers are increasing the pressure on Gov. Gavin Newsom to likewise expand authorization for who can give injections to include nursing students, retired medical workers, firefighters and National Guard members with medical training.

Newsom said the state’s priority is to deliver vaccines “as quickly as possible to those who face the gravest consequences.” He urged patience for those not yet eligible, saying: “Your turn is coming.”

Jeffri, the New Yorker, spent several days trying to book a vaccination and once actually received a slot, only to get a follow-up text saying they didn’t have the doses. Finally, with some online sleuthing from her daughter, the retired arts-administration professor got an appointment for her first shot—two weeks from now.

“It’s a relief,” said Jeffri, who wrote to Gov. Andrew Cuomo about her ordeal. “But I’m not sure I trust it until it’s done.”