EXPLAINER: How much COVID-19 vaccine will be shipped in US

EXPLAINER: How much COVID-19 vaccine will be shipped in US 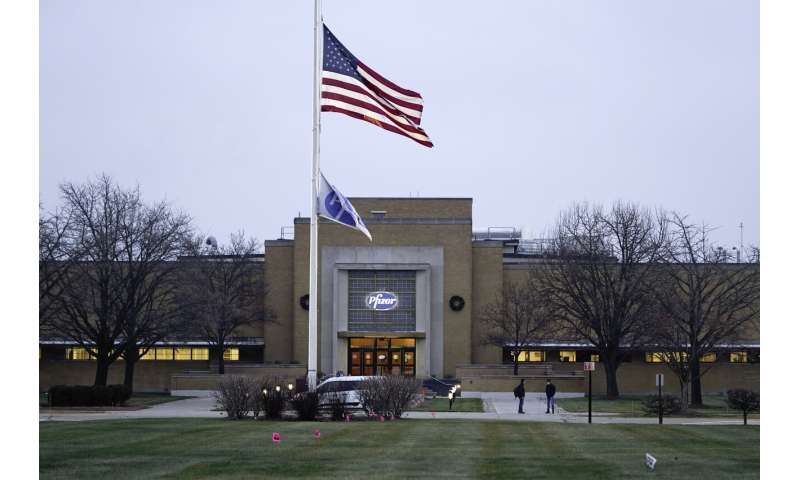 COVID-19 vaccines have begun shipping in the U.S. after getting emergency authorization, setting off the nation’s biggest ever vaccination push. But supplies are expected to be limited for some time.

The first wave of shipments is going to health care workers and nursing home residents. Officials say vaccines should be available to everyone by the middle of next year.

Trucks with Pfizer’s vaccine rolled out Sunday. They will deliver to 145 distribution centers around the country by Monday, said Army Gen. Gustave Perna of Operation Warp Speed, the government effort to develop and distribute COVID-19 vaccines. An additional 425 sites will get shipments Tuesday, and the remaining 66 on Wednesday.

For now, only Pfizer’s vaccine, which the Food and Drug Administration greenlit Friday, is being shipped. Another vaccine by Moderna will be reviewed by an expert panel this week and could get the go-ahead soon afterward.

HOW MANY SHOTS WILL BE SHIPPED OUT INITIALLY?

When states were told their first-round allocations earlier this month, the figures were based on the 6.4 million Pfizer doses that were ready for distribution at the time, Perna said. Since the Pfizer vaccine requires two doses, the government is holding back the second shots to ensure people can get them.

An additional 500,000 doses are being held in reserve for any emergencies, Perna said.

HOW MUCH VACCINE IS EACH STATE GETTING?

U.S. officials say it’s based on a state’s population of people 18 and older. Federal officials haven’t released a breakdown, but some states have shared their initial allocations.

Colorado, for example, says it’s supposed to get 46,800 doses of the Pfizer vaccine in the first round, with more expected in the weeks that follow. If the Moderna vaccine gets the green light, the initial shipment for that shot would be 95,600 doses, said Kevin Klein, director of the state’s Division of Homeland Security and Emergency Management.

HOW MUCH MORE IS ON THE WAY?

By the end of December, U.S. officials say they expect to have enough vaccine to give 20 million people their first doses—meaning they’d have around 40 million shots available. That’s factoring in Moderna’s vaccine, which also requires two doses and still has to clear regulatory hurdles.

Officials say they expect to be able to vaccinate an additional 30 million people in January and 50 million more in February.

WHY NOT DISTRIBUTE ALL THE DOSES RIGHT AWAY?

For Moderna’s vaccine, the second shot comes four weeks after the first.

Yet officials say exactly how many additional shots will become available from week to week might vary based on how much can be produced, especially in the beginning, so they don’t want to risk anyone not being able to get their second shot.

COULD THE STRATEGY CHANGE?

Officials say they might adjust once they become more confident about the flow of future supplies.

“As we get more experience on quality control on the production, we’ll get greater confidence, of course, at the level of supply reserve we hold back for the second dose administration,” Health and Human Services Secretary Alex Azar said in a briefing with reporters. “But we will not distribute the vaccine knowing that a booster will not be available, either from reserve supplied by us, or from ongoing, expected, predicted production.”

HOW ARE DOSES ALREADY AVAILABLE?

Even though the Pfizer shots just got the green light from regulators, shipments can start right away because manufacturing and stockpiling of the doses was underway. It was a chance officials took to speed up delivery if the vaccines were shown to be safe and effective.