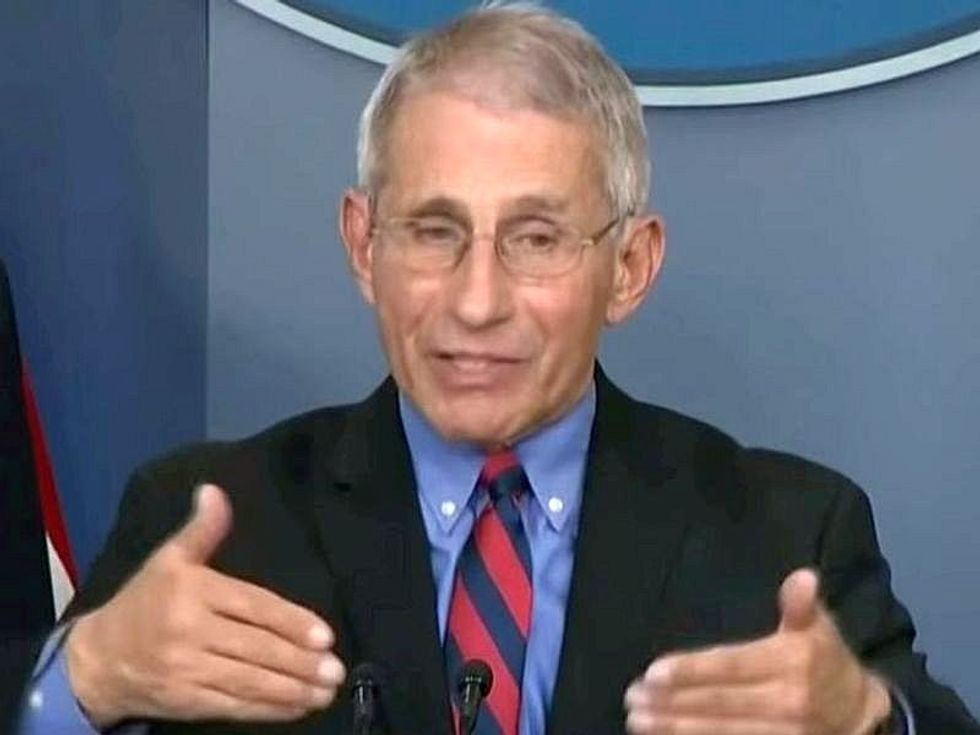 The United States will stick with its plan to give millions of Americans two doses of the Pfizer and Moderna coronavirus vaccines, Dr. Anthony Fauci said Monday.

The nation’s top infectious diseases expert told the Washington Post that shifting to a single-dose strategy for those two vaccines could leave people less protected, allow more contagious variants to spread and make Americans already hesitant to get the shots even more wary.

“We’re telling people [two shots] is what you should do … and then we say, ‘Oops, we changed our mind’?” Fauci said. “I think that would be a messaging challenge, to say the least.”

Fauci said he spoke on Monday with health officials in the United Kingdom, who are delaying second doses to give more people shots more quickly. He said that although he understands the strategy, it wouldn’t make sense in America. “We both agreed that both of our approaches were quite reasonable,” Fauci told the Post.

Some public health experts have asked U.S. policymakers to reconsider whether millions of doses intended as second shots could be distributed as first doses instead — to offer at least some protection to a greater number of people. The issue gained steam after an advisory committee to the U.S. Centers for Disease Control and Prevention on Monday tackled the question while approving Johnson & Johnson’s single-shot coronavirus vaccine.

About 80 percent of adults have yet to get a single dose, according to CDC data.

Fauci told the Post the science shows that a two-shot regimen creates enough protection to fend off more contagious coronavirus variants, while a single shot could leave Americans at risk from these variants. There is insufficient data showing how long the immunity provided by one shot would last. “You don’t know how durable that protection is,” he noted.

Fauci also argued that Pfizer’s and Moderna’s recent commitment to deliver 220 million total doses by the end of March, in addition to Johnson & Johnson’s pledge to deliver nearly 20 million shots this month, should make the issue moot.

Three new studies show that a third more contagious coronavirus variant, which arose in the Brazilian town of Manaus, infected some people who had immunity from previous bouts of COVID-19.

“I’ve been holding my breath,” said Bronwyn MacInnis, an epidemiologist at the Broad Institute, told The New York Times.

The studies have yet to be published in scientific journals, and lab findings do not always translate to the real world, the researchers noted.

“The findings apply to Manaus, but I don’t know if they apply to other places,” said Nuno Faria, a virologist at Imperial College London who helped lead much of the new research.

Despite the unknowns that swirl around the Brazilian variant, known as P.1, experts say it should be taken seriously.

“It’s right to be worried about P.1, and this data gives us the reason why,” said William Hanage, an epidemiologist at the Harvard T.H. Chan School of Public Health.

P.1 is now spreading across the rest of Brazil and has been found in 24 other countries. In the United States, the U.S. Centers for Disease Control and Prevention has recorded 10 cases in five states: Alaska, Florida, Maryland, Minnesota and Oklahoma.

Faria said it was important to double down on every measure to slow the spread of the coronavirus.

“The ultimate message is that you need to step up all the vaccination efforts as soon as possible,” he said. “You need to be one step ahead of the virus.”

The U.S. Food and Drug Administration on Saturday approved Johnson & Johnson’s single-shot coronavirus vaccine for emergency use after its advisory panel unanimously backed the vaccine a day earlier.

Adding a third vaccine to the country’s arsenal will help boost the nation’s limited supply of the two authorized shots, from Pfizer and Moderna.

Nearly 4 million doses of the newest COVID-19 vaccine were shipped Sunday night, and will begin to be delivered to states for injections starting on Tuesday, the Associated Press reported.

The White House said the entire stockpile of the newly approved single-dose Johnson & Johnson vaccine will go out immediately. J&J will deliver about 16 million more doses by the end of March and 100 million total by the end of June.

“It’s a relatively easy call; it clearly gets way over the bar, and it’s nice to have a single-dose vaccine,” said Eric Rubin, an infectious diseases specialist at the Harvard T.H. Chan School of Public Health and a member of the FDA advisory panel.

“The addition of a third COVID-19 vaccine substantially reduces the time it takes the U.S. to reach herd immunity — when a high enough proportion of the population is immunized and we can disrupt the spread of this disease,” said Dr. Lisa Lee, a public health expert who specializes in infectious diseases.

“Getting 75-85% of the population vaccinated will be easier with this additional vaccine option, especially because it, unlike the first two, does not require a complex frozen or ultra-frozen transport and storage system, and requires only one shot, instead of the two required by the others,” said Lee, who is associate vice president for research and innovation at Virginia Tech.

FDA briefing documents showed the J&J vaccine had an overall efficacy rate of 72 percent in the United States and 64 percent in South Africa, where a concerning variant emerged in the fall and has since spread to the United States, the Times reported.

The vaccine was particularly effective at preventing severe illness or death: It showed 86 percent efficacy against severe forms of COVID-19 in the United States, and 82 percent against severe disease in South Africa. None of the nearly 22,000 vaccinated people in the trial died of COVID-19.

In India, the coronavirus case count was more than 11.1 million by Tuesday, a Johns Hopkins University tally showed. Brazil had nearly 10.6 million cases and nearly 256,000 deaths as of Tuesday, the Hopkins tally showed.

Worldwide, the number of reported infections neared 114.5 million on Tuesday, with over 2.5 million deaths recorded, according to the Hopkins tally.