Interferon Shot Might Keep COVID-19 Patients Out of the Hospital

Interferon Shot Might Keep COVID-19 Patients Out of the Hospital 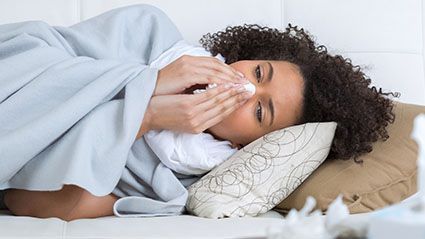 An experimental antiviral drug known as peginterferon lambda can speed up COVID-19 patients’ ability to shed the virus and recover, scientists report.

“One of the important things about this treatment that’s different from the other things that have been studied for COVID-19 is that this is working on the person, not on the virus. So it doesn’t depend at all on the strain or the sequence of the virus … we’ve heard all about these concerning variants that are escaping from the vaccine and escaping from monoclonal antibodies,” said lead researcher Dr. Jordan Feld, an associate professor of medicine at the University of Toronto, in Canada.

“The way peginterferon lambda works is it turns on the immune system to fight the virus. It’s something that the body normally does, but one of the things this virus does is it blocks your body from producing interferon, so we’re sort of giving back what the body normally uses to fight off this infection,” he explained.

According to the study, patients given a single injection of peginterferon lambda were over four times more likely to have cleared the infection within seven days, compared with patients given an inactive placebo.

Among patients with the highest levels of the virus, 79% were more likely to shed the infection than those given a placebo (38%). The viral levels rapidly decreased in all who received peginterferon lambda, the researchers found.

That could prevent patients with high levels of COVID-19 from becoming severely sick or giving it to others.

For the study, 30 patients were given the drug and 30 received the placebo. Among the 60 patients, five went to emergency rooms with severe respiratory symptoms. Among those, four had received placebo and only one received peginterferon lambda.

Dr. Mangala Narasimhan is director of critical care services at Northwell Health in New Hyde Park, N.Y. She said, “This study is promising, but the question remains if this will mean a decrease in the severity of the symptoms of COVID. Further studies will have to be done to follow these patients to see if the course of disease is changed with this therapy.”

The drug mimics an interferon produced by the body that responds to viral infections by turning on pathways to kill the virus. COVID-19 prevents the body from producing interferons, which is one way it gets past the body’s immune system. Unlike other interferons, peginterferon lambda doesn’t affect every cell in the body, but only cells in the lungs, liver and intestine, the places where COVID-19 replicates.

But because the drug’s action is limited, it doesn’t have the serious side effects associated with other forms of interferon. In this phase 2 trial, patients given peginterferon lambda had similar side effects to those given placebo.

Feld also said that it’s possible that giving peginterferon lambda before someone is infected might prevent the infection and stop the spread of the virus. It’s also being tested in patients with severe COVID-19 to see if it will speed recovery, he said.

The next step before the drug can be made generally available is a phase 3 trial where the drug will be tested on a larger group of people. Feld said the trial should begin soon, and if successful, approval by the U.S. Food and Drug Administration would come in a few months.

“I think the interferons as a group have a lot of potential. It’s too early to say — it’s not yet ready for primetime — we need phase 3, we need a large control group. We need to figure out where in the process this best works,” he said.

Siegel added that everybody makes different amounts of interferon and giving interferon might boost the response needed to fight the virus.

“I agree with using this as a preventative, and using it early in the game makes sense,” Siegel said. “You’re getting around the virus’ ability to trigger the inflammatory response — that’s the hope.”

The report was published online Feb. 5 in The Lancet Respiratory Medicine.

For more on COVID-19, head to the U.S. Centers for Disease Control and Prevention.