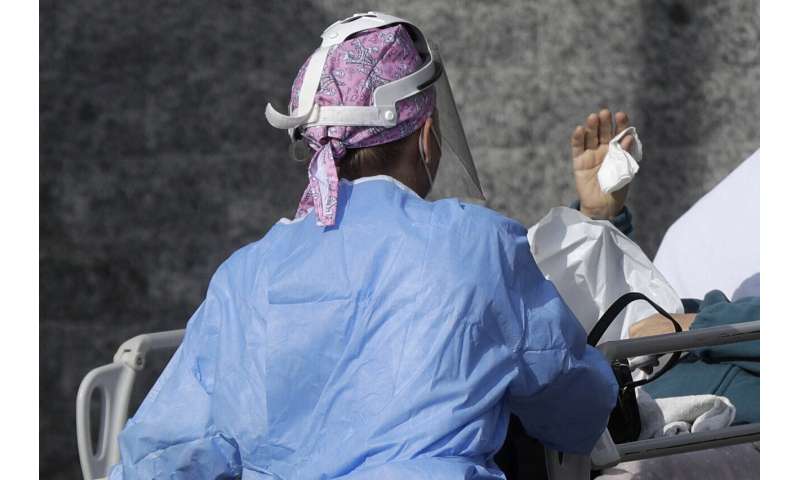 The regions of Italy that include the cities of Naples and Florence were declared coronavirus red zones Friday, the latest signals of the dire condition of Italian hospitals struggling with a surge of new admissions.

The director of the National Health Institute, Gianni Rezza, said the stricter measures were justified by a “worrisome increase in hospitalizations” as Italy’s rate of new confirmed cases reached 650 per 100,000 people. Confirmed cases hit a daily pandemic high of nearly 41,000 and 550 people died of the virus in 24 hours, bringing the country’s known death toll to 44,139. Italy has reported a total of more than 1.1. million virus cases.

Naples hospitals made headlines this week when a video that went viral showed an elderly man lying dead on the floor of an emergency room bathroom. The video, shot with a smartphone inside Antonio Cardarelli Hospital also shows what appears to be an overcrowded emergency area with patients lying on stretchers close together and left without medical assistance.

Unlike in wealthier northern regions, the medical system in southern Italy is more fragile. Many southerners have traditionally traveled to the north for non-routine medical care. The system in Campania, the region where Naples is located, emerged last December from a decade under government control aimed at wiping out waste and improving care. Union representatives note that 16,000 health care workers were cut in the 10-year period.

“The difficult situation is understandable. Unfortunately, staff numbers are below the needs of this area,” said CGIL union representative Alfredo Garzi. “They try to cope with what they have available.”

The south of Italy largely was spared during the deadly virus epidemic that exploded in the country’s north during March and April. However, the virus spread throughout the country during a remarkably relaxed summer that featured packed Italian beaches, restaurants and night clubs.

The situation has intensified in the Campania region, where hospitalizations went from 421 on Oct. 1 to 2,153 on Friday and 183 people currently are in intensive care, up from 38 six weeks ago.

“We’re subject to high stress, working with no pause, not looking at the working hours anymore,” Giuseppe Visone, a doctor in the Antonio Cardarelli Hospital first aid unit and CGIL union representative. “What’s good about this hospital is that they never turned away any patients.”

The Italian government is imposing varying levels of infection-control restrictions under a three-tiered, color-coded system, with red as the least restrictive, orange in the middle and yellow as the most serious top tier. Regions designated as red zones are subject to partial lockdowns under which only grocery stores, pharmacies, newsstands and other shops deemed necessities may remain open.

On Sunday, Campania and the central region of Tuscany are set to join join five other red-zone regions and autonomous provinces, including Italy’s virus epicenter, Lombardy, and the southern region of Calabria, where the health system is currently under government control.

Naples Mayor Luigi de Magistris expressed relief that Campania had been designated a red zone, telling The Associated Press that ”the health system is under massive pressure and on the verge of collapse.”

“We wanted to close everything in October, for a full month,…which would have allowed a tranquil Christmas,” de Luca said in a Facebook video. “This choice by the government made us lose two precious months, during which we have seen a dramatic increase in hospitalizations and deaths.”

But even regions in the top-tier yellow zones, which are subject to a 10 p.m. curfew but where indoor dining is permitted before 6 p.m., are struggling to get the message out to people to avoid gatherings. The Veneto region has forbidden citizens from traveling out of their town limits for the usual weekend strolls in city centers, mountains and lakes this weekend.

Defying the new ordinance would mean “you are not being respectful to or showing solidarity with those who work in hospitals,” Veneto governor Luca Zaia said.