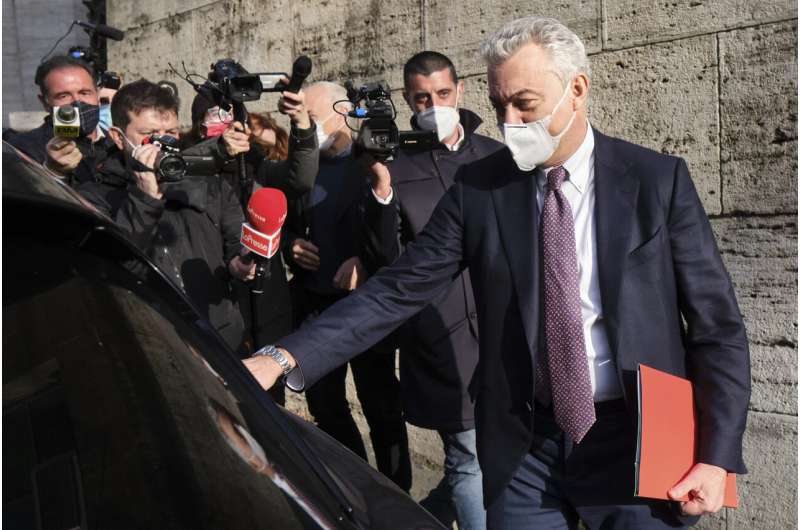 Italy’s northern Lombardy region, where Europe’s coronavirus outbreak erupted last year, asked the national government Thursday for more vaccines to help stem a surge of new COVID-19 cases that are taxing the health system in the province of Brescia.

The province’s fast-growing caseload is contributing to another upswing in reported cases nationwide: Italy added another 19,886 confirmed infections Thursday, its highest daily number since early January. Authorities reported another 308 virus-related deaths, bringing the country’s official toll in the pandemic to just under 97,000.

Brescia, with a population of around 1.2 million, has seen its daily cases go from the mid-100s at the start of February to 901 on Wednesday and 973 Thursday, due to clusters of infections traced to the British variant. Doctors say the number of hospitalized COVID-19 patients in the main public hospital went from an average of around 200 to 300 recently.

“We can’t talk about a third wave from our point of view, just because the second one never really ended,” said Dr. Cristiano Perani, head of emergency room at Brescia’s civic hospital. “The increase was gradual, but had an acceleration in the last few weeks.”

Lombardy’s governor, Attilio Fontana, said he told Italy’s health minister Thursday that the region needed an “immediate delivery (of vaccines) in the territory where the virus is growing.”

Already, Lombardy—Italy’s most populous region—has imposed new lockdown measures in Brescia and revamped its vaccine strategy to redirect the jabs it has on hand to the province and nearby towns in neighboring Bergamo. The aim of the strategy is to inoculate as many people as possible as quickly as possible in the hardest-hit areas.

Guido Bertolaso, who is in charge of the vaccine campaign, said the region was going to bypass the 30% reserves that the national government recommends keeping on hand for second doses, and starting Thursday would begin vaccinating residents ages 60-79, well earlier than scheduled. Lombardy only recently began vaccinating people aged over 80, after prioritizing health care workers and residents of nursing homes.

The aim of the strategy, Bertolaso said, is to create a “health cordon” in the area with blanket vaccinations. The approach is based on studies from Britain and Israel—and even on Lombardy’s own data—that show declines in infection rates as more people are vaccinated with only one dose.

“This is war,” Bertolaso said.

“We are ready to make sacrifices if the vaccination campaign goes forward 24/7,” she said.

Brescia and Bergamo were two of the Italian provinces hardest hit during the first wave of the pandemic, which began this time last year and quickly turned Lombardy into the epicenter of the outbreak in Europe.

Lombardy as a whole still accounts for nearly a third of Italy’s 96,974 confirmed COVID-19 dead, and a fifth of its 2.87 million confirmed infections. Italy has the world’s sixth-highest confirmed death toll, and the second in Europe after Britain.

Italy’s vaccine campaign, which has administered 3.92 million doses, has been slowed by delays in deliveries from the three pharmaceutical companies supplying the European Union: Pfizer-BioNTech, Moderna and AstraZeneca.

It wasn’t immediately clear whether the health ministry would redirect any vaccines to Lombardy, given previously established quotas which have already delivered the most doses there.

Nearly two months after Italy began its vaccination campaign on Dec. 27, the tiny Republic of San Marino administered its first doses Thursday. San Marino, a city state of about 33,800 people surrounded by Italy, had to buy Russian Sputnik V doses after delays in receiving allotted doses from Italy.

“This constitutes the most effective weapon we have to defeat this disease,” said Dr. Enrico Rossi, who was among the first inoculated. “It has been kind of a nightmare this year but we are hopeful that it will end.”