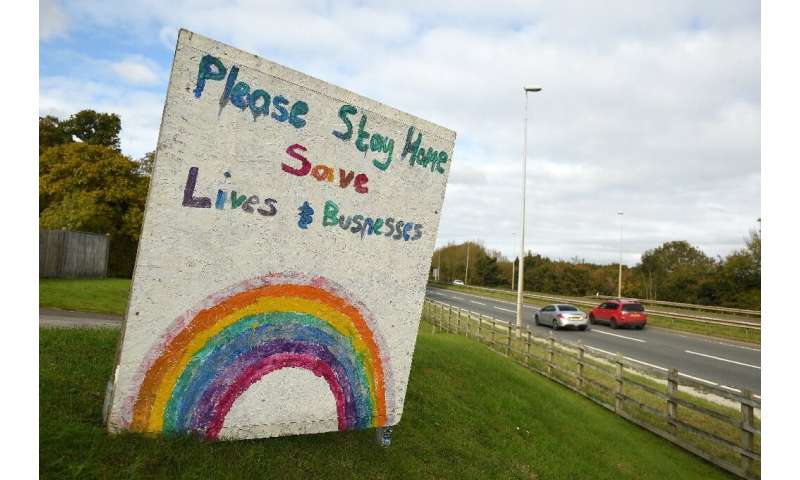 Under the stringent new rules set to come into force from Thursday, people must stay at home except in cases where exemptions apply, such as for work, education or exercise, while all but essential shops will close.

In contrast to the months-long UK-wide lockdown earlier this year, schools, colleges and universities will remain open.

But pubs and restaurants will shut unless serving takeaway food, while all leisure and entertainment venues and non-essential shops will close.

The restrictions are planned to end on December 2.

“Now is the time to take action because there’s no alternative,” Johnson said at a Downing Street news conference after convening his Cabinet earlier in the day to sign off on the plan.

“We have got to be humble in the face of nature. In this country, alas, as in much of Europe, the virus is spreading even faster than the reasonable worst-case scenario of our scientific advisers,” he added.

The British premier will set out the new measures, which include extending a financial support scheme to help businesses pay furloughed employees for an additional month to December, to parliament on Monday.

Lawmakers will then vote on them on Wednesday.

The ramped-up response came as Britain surpassed one million cases during the global pandemic, after announcing nearly 22,000 new infections on Saturday, and virus hospitalisations climbed by 1,239, the highest daily tally since late April.

The government’s scientific advisors have warned that Covid-19’s prevalence, and resulting hospitalisations and deaths, are rising faster than their most dire predictions.

Flanking Johnson at the announcement, Chief Medical Officer Chris Whitty said that under the current trajectory hospital intensive care units and ventilator capacity could be overwhelmed by early December.

Chief Scientific Adviser Patrick Vallance said there was the potential for twice as many deaths as during the first wave of the pandemic.

Britain is already among the hardest-hit countries in Europe, with the total Covid-19 related deaths nearing 47,000, after another 326 fatalities were announced.

Some European countries and the devolved governments in Scotland, Wales and Northern Ireland have already reimposed partial lockdowns to try to cut their surging rates.

Johnson’s government, which is responsible for health policy in England only, had resisted the move, fearing the economic fallout.

Instead it has persevered with a localised response system that relies on three tiers of Covid-19 alert.

Only at the highest level, imposed in recent weeks on a number of regions and cities in northern and central England, are pubs and bars closed and indoor socialising banned.

Last month, the government’s Scientific Advisory Group for Emergencies (SAGE) recommended a two-week national “circuit-breaker” lockdown over the half-term school holidays this past week, but Johnson rejected the move.

Johnson defended the policy on Saturday, adding: “It’s true that the course of the pandemic has changed and it’s right that the government should change and modulate its response in accordance, and I make absolutely no apologies for that.”

But his critics say that delaying the decision has resulted in the need for an even longer lockdown now.

The British premier has also faced stiff opposition to another shutdown from within his own ruling Conservative party, from right-wing newspapers and also scientists and doctors who believe that lockdowns do not work and are too damaging.

Earlier this year, Johnson—who contracted Covid and was treated in intensive care—was criticised for a slow response to the outbreak, delaying locking down Britain even as the number of positive cases and deaths spiralled across Europe.

He eventually imposed a national lockdown in late March, shutting all non-essential shops and schools, and forcing millions to work from home to cut transmission rates.

The stay-at-home measures were lifted in June as cases dwindled, with Johnson declaring in July the country could see “a more significant return to normality from November… possibly in time for Christmas”.