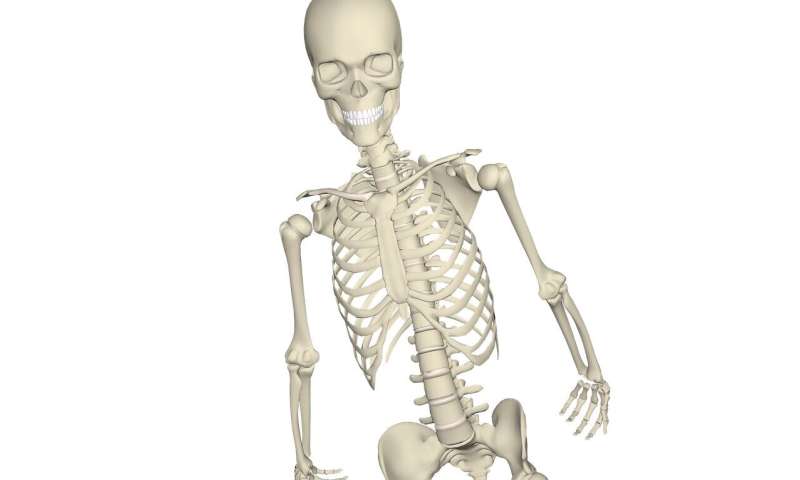 A multidisciplinary team of researchers led by Children’s Hospital of Philadelphia (CHOP) has discovered several genetic markers associated with bone mineral accrual, which could ultimately help identify causes of eventual osteoporosis earlier in life through genetic testing. The findings, which were made possible by following a group of children over several years, were published online by the journal Genome Biology.

Osteoporosis is widely considered a disease of old age. However, the accrual of bone density early in life is critical for achieving optimal bone mass in adulthood and influences bone health throughout a person’s life. While studies have looked at genetic markers associated with bone health in adulthood, very few have been performed in children during the most critical period of bone growth.

Additionally, genome-wide association studies (GWAS) have attempted to pinpoint genetic markers associated with bone growth, but an improved understanding of the spatial organization of the human genome can reveal underlying causal genes that may have otherwise been missed.

“We wanted to do a GWAS study that measured bone mineral accrual at multiple time points to provide us with proper longitudinal data at ages when the skeleton is growing and developing,” said Struan F.A. Grant, Ph.D., Director of the Center for Spatial and Functional Genomics and the Daniel B. Burke Endowed Chair for Diabetes Research at CHOP and lead author of the study. “By doing a longitudinal study, we had much greater power in a relatively small cohort of patients.”

The study team, which included experts in genetics as well as bone biology, compiled data from approximately 11,000 bone density measurements that were conducted as part of the Bone Mineral Density in Childhood Study (BMDCS), a project headed by Babette S. Zemel, Ph.D., Associate Program Director of the Clinical and Translational Research Center, Director of the Bionutrition Core Laboratory at CHOP and first author of the study. Once the genetic markers were identified, the researchers used a variant-to-gene mapping method to look for both underlying causal variants as well as corresponding effector genes. They further investigated specific genetic markers, or loci, to characterize their impact on osteoblast function.

Using this method, the researchers identified 40 distinct loci—including 35 that had not been previously reported—associated with bone accrual. Several of these loci are associated with fracture risk later in life. Additionally, the researchers identified two novel effector genes that are potentially causative. Finally, they also identified multiple genetic pathways involved in variation in bone accrual that have important roles in determining whether cells eventually become osteoblasts (bone cells) or adipocytes (fat cells).

“This study is one of many that demonstrates how these loci are manifesting themselves earlier in life than we had previously thought,” said Zemel. “In this case, our findings may help us better tailor lifestyle interventions, such as exercise and dietary changes, that will help patients later in life, and they may also lead to novel therapeutic interventions.”