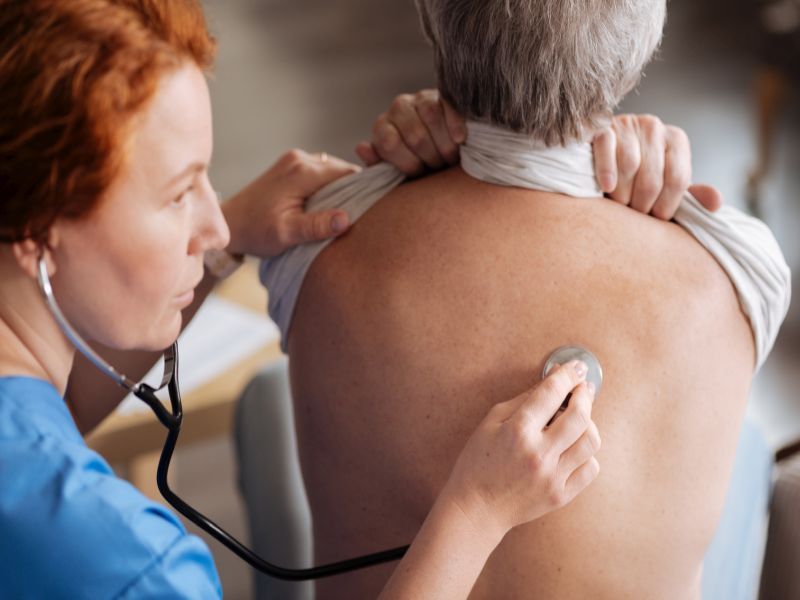 Lung cancer patients who harbor certain bacteria in the airways may have a poorer prognosis, a new study finds, adding to evidence that the body’s “microbiome” may play a role in cancer patients’ outlook.

The microbiome refers to the trillions of bacteria and other microbes that naturally dwell in the body. Research in recent years has been revealing how important those bugs are to the body’s normal functions, including immune system defenses.

When it comes to cancer, studies have hinted that the microbiome can influence tumor progression, and patients’ likelihood of responding to certain treatments.

For example, a number of cancers can be treated with immunotherapy — various approaches to boosting the immune system’s natural tumor-fighting capacity. Research has found that patients who respond well to immunotherapies tend to have a different makeup in the gut microbiome, compared to patients who do not respond.

The new study, published Nov. 11 in Cancer Discovery, took a different view. Instead of focusing on the gut microbiome, researchers analyzed lung microbes of patients with newly diagnosed lung cancer.

Traditionally, he explained, the lungs were believed to be “sterile.” But recent research has shown that even in healthy people, the lungs can harbor low amounts of bacteria — drawn in from the air or the mouth.

Looking at tissue samples from 83 patients, the researchers found that those with advanced-stage cancer carried more microbes than patients in the early stage of disease.

And when patients did have “enrichment” with certain bacteria types, their odds of survival were lower — even those with earlier-stage cancer.

Specifically, patients harboring Veillonella, Prevotella and Streptococcus bacteria had a worse prognosis. They also showed signs of an inflammatory immune response that, based on past research, may worsen lung cancer patients’ outlook.

None of that proves the bacteria, themselves, were to blame, Segal said. The cancer itself might make the lungs more “receptive” to being colonized with bacteria.

So the researchers turned to lab mice. They transferred Veillonella bacteria into mice with lung cancer and found that the microbes revved up “bad” inflammation, fed tumor growth and shortened the animals’ survival.

That suggests lung bacteria might modulate the immune response in a way that affects lung cancer progression, according to Segal.

But the microbiome is complicated, and it’s hard to draw conclusions from mouse findings, according to Dr. Thomas Marron of Mount Sinai’s Tisch Cancer Institute in New York City.

Right now, he said, there is a “huge interest” in understanding the microbiome’s influence in cancer.

“Studies like this are really interesting,” said Marron, who was not involved with the research, “but we’re probably a few decades away from being able to alter the microbiome to treat cancer.”

Individuals vary in their microbiome makeup, and that’s determined by things like genetics and the immune system, Marron explained. So even if the body’s microbial communities directly affect cancer prognosis, he said, it will be a long time before researchers can turn that into therapy.

“We still don’t know how we could effectively target the microbiome,” Marron said.

He pointed to one question from the new findings: Is there any link between the lung microbiome and patients’ likelihood of responding to immunotherapy?

Segal said his team plans to study that.

“At this point, we’re not ready to directly act on this in the clinic, by either trying to kill ‘bad’ bacteria, or add back ‘good’ bacteria,” said Heymach, who was not part of the study.

So far, he noted, studies have reached different conclusions as to exactly which types of bacteria are related to better cancer outcomes — which might be due to differences in how studies look for the microbes.

And like Marron, Heymach pointed to the microbiome’s complexity: It generally differs from one large population to the next and among individuals — based on numerous factors.

Lung cancer is a disease in which lung cells grow abnormally in an uncontrolled way.
See Answer

Still, Heymach said the recent “explosion” in microbiome research could eventually lead to applications in cancer treatment. Besides the possibility of altering the microbiome, he said doctors might be able to use patients’ microbiome makeup as a “biomarker” of their risk of progression.

The American Cancer Society has more on cancer immunotherapy.