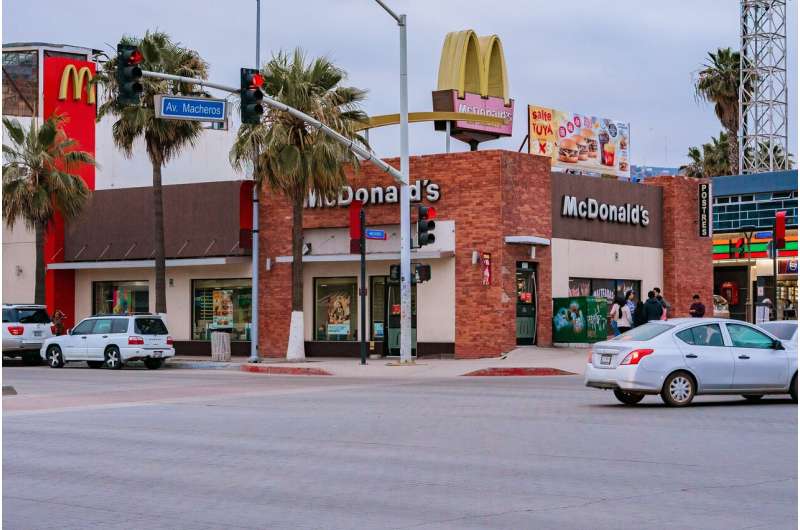 Fast food giant McDonald’s seems to be focusing on kids in lower middle income countries, with more Instagram posts, price promotions, and child friendly marketing than is evident for wealthier nations, reveals an analysis of the company’s social media marketing across 15 countries and published in the open access journal BMJ Nutrition Prevention & Health.

These tactics may worsen existing healthcare issues in some of the world’s most vulnerable countries, say the researchers, who note the contrast with the health promotion themes the company deploys for its social media marketing in higher income countries.

Social media advertising by fast food companies continues to increase globally, but although McDonald’s—the largest fast food company in the world—operates in 101 countries,  relatively little is known about its marketing techniques in different continents, say the researchers.

In a bid to plug this knowledge gap, they analysed the company’s posts on one of the world’s most popular social media platforms, Instagram, in 15 high-, upper-middle, and lower-middle income countries, as defined by the World Bank.

They captured all the screenshots that McDonald’s posted on these Instagram country accounts from September to December 2019 and added up the number of followers, ‘likes’, ‘comments’ and video views associated with each account in April 2020.

A total of 849 marketing posts were identified. McDonald’s posted 154% more posts in lower middle-income countries than in higher income countries: an average of 108 posts compared with 43 during the 4 months of the monitoring period.

“Price is a key component of a marketing mix and is often used to aid consumer purchases, particularly among lower income communities who may use price as a decision point,” the researchers note.

This is an observational study, and as such, can’t establish cause and effect. And the findings must be interpreted cautiously, given the uneven sampling, the small number of countries involved, and the lack of information on the purchasing behaviours/eating habits of those following McDonald’s accounts on social media, say the researchers.

The company may also operate differently in the various countries included in the study, they add.

But McDonald’s has more than 14,000 restaurants in the US alone and nearly 22,000 in other countries, they point out. And although the link between the growth of fast food companies internationally and the individual demand for fast food is complex, fast food ads have an influential role in persuading people to eat these products, they note.

“By targeting certain subsets through child-targeted ads and price promotions, McDonald’s’ social media ads may exacerbate healthcare issues in the most vulnerable countries in the world.”

There’s a growing need to tackle the globalisation of food and drink marketing in developing countries that may experience higher levels of poor diet, obesity, and related illnesses, they add.

“This is an important and timely analysis, because we are beginning to gain insights into ‘whole systems’ determinants of food choices, which include food production, food supply, and the food environment,” comments Sumantra Ray, executive director of the NNEdPro Global Centre for Nutrition and Health.

“Advertising and public health messaging can modify all these factors, especially the food environment, which in turn can influence and change dietary food patterns. And this study offers early but crucial insights into the impact of advertising, a relatively neglected area of nutritional research.”