New Clues Into How Cancers Originate in the Brain

New Clues Into How Cancers Originate in the Brain 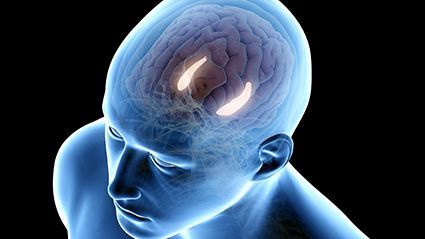 Investigators from the University of Toronto discovered that the healing process after a brain injury could spur tumor growth if new cells meant to replace those lost in the injury were derailed by mutations.

“Our data suggest that the right mutational change in particular cells in the brain could be modified by injury to give rise to a tumor,” said lead researcher Dr. Peter Dirks, head of the Division of Neurosurgery and a senior scientist in the Developmental and Stem Cell Biology program at Toronto’s Hospital for Sick Children.

“Glioblastoma can be thought of as a wound that never stops healing,” Dirks said in a university news release. “We’re excited about what this tells us about how cancer originates and grows, and it opens up entirely new ideas about treatment by focusing on the injury and inflammation response.”

The researchers applied the latest RNA sequencing and machine-learning technologies to map the molecular makeup of glioblastoma stem cells.

They found new subpopulations of glioblastoma stem cells that had the molecular hallmarks of inflammation and were co-mingled with other cancer stem cells inside patients’ tumors.

Dirks said this suggests that some glioblastomas start to form when the normal tissue healing process gets derailed by mutations, possibly even many years before a patient has symptoms.

A brain injury can include trauma, infection or stroke. Once a mutant cell becomes engaged in wound healing, it cannot stop multiplying because the normal controls are broken.

“The goal is to identify a drug that will kill the glioblastoma stem cells,” said Gary Bader, a professor of molecular genetics in the university’s Donnelly Centre for Cellular and Biomolecular Research. “But we first needed to understand the molecular nature of these cells in order to be able to target them more effectively.”

Researchers collected glioblastoma stem cells from 26 patients’ tumors. They expanded them in the lab, analyzing nearly 70,000 cells by single-cell RNA sequencing. This detects what genes are switched on in individual cells.

It was also determined that each tumor was biased either toward the developmental or the injury response end of the gradient and the two states were vulnerable in different ways.

“We’re now looking for drugs that are effective on different points of this gradient,” said Trevor Pugh, senior scientist at the Princess Margaret Cancer Centre. “There’s a real opportunity here for precision medicine — to dissect patients’ tumors at the single cell level and design a drug cocktail that can take out more than one cancer stem cell subclone [a clone selected from a clone, especially after a mutation occurs] at the same time.”

The research was published Jan. 4 in the journal Nature Cancer.

The American Association of Neurological Surgeons has more on glioblastoma.

Which of these is NOT a type of head and neck cancer?
See Answer