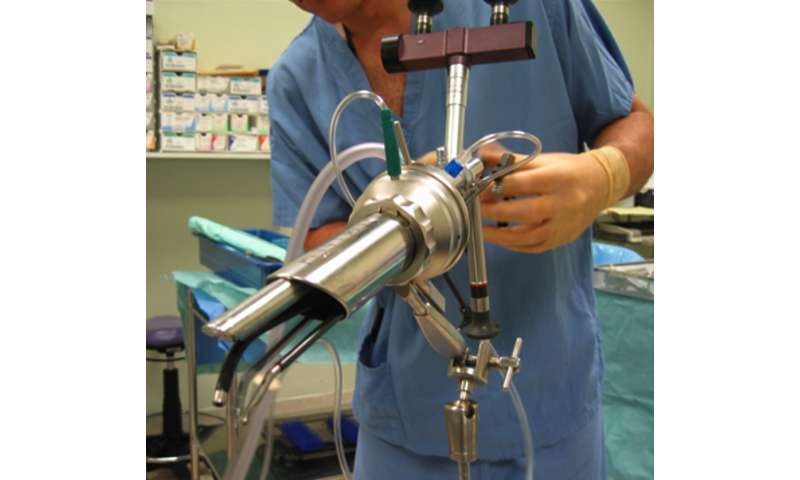 A new and less invasive treatment developed by Cancer Research UK researchers is safer than standard major surgery for early-stage rectal cancer, giving patients a better quality of life with fewer life-altering side effects, results from a pilot study show.

Results from the TREC trial show that a combination of local keyhole surgery and radiotherapy, rather than major surgery that removes the whole rectum, prevents debilitating side effects, such as diarrhoea, or the need for a permanent colostomy bag.

Patients reported a better quality of life with the new treatment, with less impact on their family and social life, and felt more positive about their body image and the way their bowels work.

The findings are published in The Lancet Gastroenterology & Hepatology today, and a clinical trial is now open to eligible patients who wish to receive this new treatment.

Every year, 11,500 people in the UK are diagnosed with a tumour located in the rectum, the last part of the intestine which connects to the anus. Standard treatment is a major operation to remove the whole rectum, even if the cancer is early stage. About 25% of these major surgeries are done on small, early-stage tumours, and while it is effective, the operation can lead to long-term side-effects that seriously impacts quality of life for survivors.

43% of rectal cancers are caught at an early stage (stage 1 and 2) and doctors need better, less invasive treatments for these tumours.

Mr Simon Bach and his team at the University of Birmingham, along with collaborators at the University of Leeds, have developed a new treatment approach called ‘organ preservation’ for early-stage rectal cancer that uses radiotherapy followed by local keyhole surgery 8-10 weeks later to remove only the part of the rectum affected by cancer.

Mr Simon Bach, lead researcher, says: “We took a lot of inspiration from progress against breast cancer. In the early 90s, most people with breast cancer would have a mastectomy, where the whole breast is removed, as the first part of their treatment. But now, due to awareness campaigns, the breast screening programme and new treatments, mastectomy is much rarer. We wanted to test a similar approach for our rectal cancer patients.”

To test whether organ preservation treatment could be a suitable alternative to major surgery for early-stage rectal cancer, 123 patients were enrolled in the TREC trial.

Doctors gave the new treatment to 61 patients for whom the major surgery would have been considered unsafe.

In addition, 55 patients were randomised to two treatment approaches; 28 received major surgery and 27 received the new organ preserving treatment. 70% (19/27) of these were treated successfully, meaning their tumour was removed while preserving the rest of their rectum and their cancer did not return during the 3- to 5-year follow-up period. People who received the new treatment also reported fewer side-effects than people who had major surgery.

The analysis of patient-reported quality of life for 3 years after treatment, by Cancer Research UK clinical trial fellow Dr. Alexandra Gilbert, found that people who received the new treatment fared better. They reported less diarrhoea, less embarrassment about their bowel functions, felt more satisfied with their body image, and felt like their treatment interfered less with their family life and social life compared with those who received major surgery.

Similar results were also seen in the 61 patients for whom the standard surgery would have been considered unsafe, showing that the new treatment could be a safe and effective option.

Co-author Dr. Alexandra Gilbert, from the University of Leeds and Leeds Teaching Hospitals NHS Trust, said: “When talking about cancer treatment, the focus is rarely on how severe the effects can be for patients. But we studied this in detail and found that our organ preservation approach made a significant difference to people’s quality of life. One of the most striking benefits was avoiding the need for a stoma bag, which we know is really important to our patients.”

Mr Simon Bach and his team are now running an international, larger-scale version of their study, called STAR TREC, across the UK, Netherlands and Denmark. The trial will help decide whether the new treatment should become the new standard treatment for early rectal cancer. This follow-up trial is currently open for recruitment, and importantly, patients may decide if they prefer to receive organ preservation.

The researchers are encouraging people who have been diagnosed with an early-stage rectal tumour to discuss their options with their surgeon should they wish to consider joining the ongoing trial.

Michelle Mitchell, chief executive of Cancer Research UK, said: “When people with cancer finish their cancer therapy, it’s not the end of the ordeal. The physical and emotional strain from the effects of treatment can last for years afterwards, or even a lifetime.

“Patients are at the heart of what we do, and that’s why results from trials like TREC are such good news. If we can find less intensive treatments with fewer side-effects, patients feel stronger and more confident, and they are in a better place to socialise, enjoy time with their friends and family, and live life to the fullest.”

Martin Ledwick, Cancer Research UK’s head information nurse, said: “This new treatment could be life-changing for people diagnosed with early-stage cancer. Diagnosing bowel cancer earlier means treatments are far more likely to work, so we encourage eligible people to consider taking part in bowel cancer screening when they receive their testing kit, and for anyone who notices any changes to their body to tell their GP about it.”