No Hams: Pigs Show Their Smarts in Complex Experiments

No Hams: Pigs Show Their Smarts in Complex Experiments 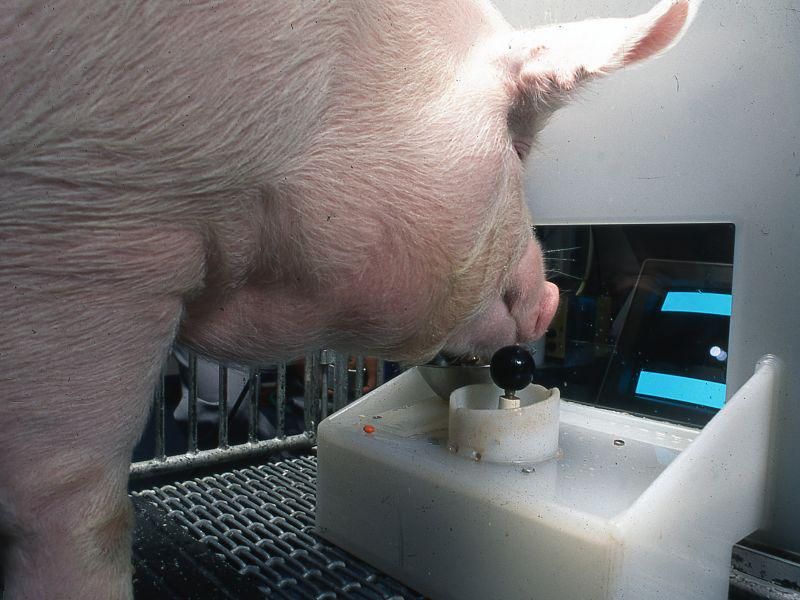 “Four pigs were playing a video game” may sound like the start of a joke, but it’s not.

Researchers taught four pigs how to play a rudimentary joystick-enabled video game, finding the animals were capable of advanced behavioral and mental flexibility.

“It is no small feat for an animal to grasp the concept that the behavior they are performing is having an effect elsewhere. That pigs can do this to any degree should give us pause as to what else they are capable of learning and how such learning may impact them,” said study author Candace Croney, a professor at Purdue University and director of the Purdue Center for Animal Welfare Science.

In the first phase of the study, they were each trained to approach and then manipulate a joystick with their snouts in front of a computer monitor. Then they were taught how to play the video game, moving the cursor using the joystick toward up to four target walls on the screen.

Researchers found that the pigs understood that the movement was connected to the cursor on the screen because they performed the tasks so well. The findings were published Feb. 11 in the journal Frontiers in Psychology.

“This sort of study is important because, as with any sentient beings, how we interact with pigs and what we do to them impacts and matters to them,” Croney said in a journal news release.

“We therefore have an ethical obligation to understand how pigs acquire information, and what they are capable of learning and remembering, because it ultimately has implications for how they perceive their interactions with us and their environments,” she said.

Prior to this study, scientists knew that pigs were capable of learning basic commands and more complex behaviors that required them to change course as the rules of the game changed.

In the new study, the pigs could not match the skill level of non-human primates or demonstrate full mastery, but researchers said this could partially be explained by the experiment, which was designed for animals who are visually oriented and dexterous. Pigs, of course, don’t have opposable thumbs. They’re also far-sighted.

Sarah Boysen, who is known for her work on chimpanzee cognition at Ohio State University, co-authored the study.

The researchers were not able to investigate another goal in which they would have communicated with pigs more directly using a computer interface with symbols. The study ended before that could happen.

“Informing management practices and improving pig welfare was and still is a major goal, but really, that is secondary to better appreciating the uniqueness of pigs outside of any benefit we can derive from them,” Croney said.

The Jane Goodall Institute of Canada offers some fun facts about chimpanzee communication.