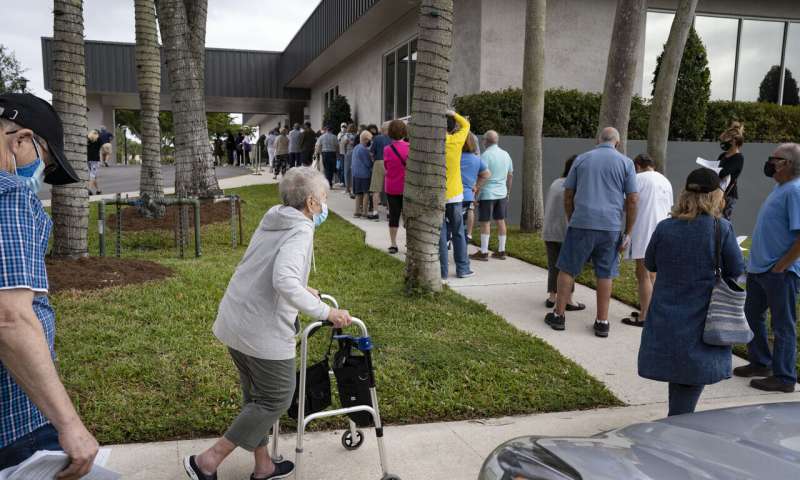 Florida health authorities late Thursday reported finding evidence of the latest U.S. case of the new and apparently more contagious coronavirus strain first seen in England, saying it was detected in a man with no recent travel history.

The case, disclosed in a Florida Health Department statement tweeted on its Colorado and California.

Florida’s health statement said the new virus variant was detected in a man in his 20s in Martin County, which abuts the Atlantic Coast above densely populated South Florida. It said its experts were working with the Atlanta-based Centers for Disease Control on investigating the case.

The health department did not give further details, such as releasing the man’s medical condition or how the strain was detected.

California on Wednesday became the second state to confirm a case of the new virus strain. The announcement came 24 hours after word of the first reported U.S. variant infection, which emerged in Colorado—in a Colorado National Guardsman who had been sent to help out at a nursing home struggling with an outbreak.

Scientists in the U.K. believe the variant is more contagious than previously identified strains. The cases have triggered questions about how the version circulating in England arrived in the U.S. and whether it is too late to stop it now, with top experts saying it is probably already spreading elsewhere in the United States.

The Florida Health Department also tweeted late Thursday that experts anticipate little to no impact on the effectiveness of the COVID-19 vaccinations being rolled out in a state grappling with overwhelming demand for the vaccines from its large senior population.

Florida Gov. Ron DeSantis has said that people 65 and older—more than 4 million of Florida’s 21 million population—would be prioritized over essential workers to receive the vaccine. But hospitals and health departments have been struggling to keep up with the demand.

People have clogged hotlines to book appointments, and some seniors have camped out overnight outside vaccination sites, leading some hospitals to hit pause on scheduling further shots.

Traffic event stretched nearly half a mile (0.8 kilometers) from the Health Department’s headquarters near the St. Johns County municipal complex in St. Augustine, where some people said they waited hours for the shot.

Jared Moskowitz, director of the Florida Division of Emergency Management, said in an interview with the Orlando Sentinel that the state has directed distribution of about 700,000 dosages of the cocktail, but only about a quarter of those have been used so far.

“That tells me there are vaccines sitting in freezers … we want all of our partners to know it’s their jobs to get the vaccine out there,” Moskowitz said.

Moskowitz also expressed frustration with the federal government for sending limited information on the amount of doses that will be sent, which has complicated state planning.

Meanwhile, COVID-19 hospitalizations are still rising. The state’s hospital bed census tallied 6,352 coronavirus patients by late Thursday morning, a slight increase from Wednesday’s figure of 6,331, but much larger than the daily totals in October.

María Elvira Salazar, a Republican who defeated Democratic U.S. Rep. Donna Shalala in November, learned she was infected with the virus during an emergency trip to the hospital for treatment of heart arrhythmia.

Salazar was treated, released and will be quarantined for at least 14 days and miss Sunday’s swearing-in ceremony of the 117th Congress in Washington, her office announced Thursday.