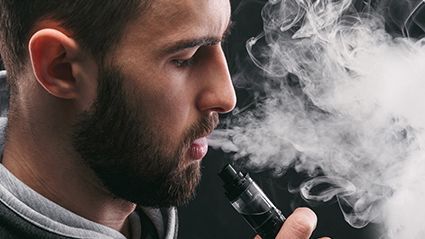 One of every three people who vape say they have symptoms associated with damage to the lungs or respiratory tract, a new study reports.

Specifically, 33% of e-cigarette users reported having one or more of the five symptoms associated with EVALI, or e-cigarette– or vaping-associated lung injury, researchers said.

These symptoms include cough, shortness of breath, nausea, stomach pain and chest pain.

People who used disposable e-cigarettes were less likely to suffer these symptoms, indicating that part of the problem comes from experimentation with unregulated ingredients and untested devices, said senior researcher Dr. Thanh-Huyen Vu, a research associate professor of epidemiology at Northwestern University Feinberg School of Medicine in Chicago.

The U.S. Centers for Disease Control and Prevention created the name EVALI in 2019 for lung problems associated with vaping. It named the problem after increasing numbers of vapers fell ill with severe lung illness.

For this study, Vu and her team looked at more than 1,400 people who vaped in 2016. Participants listed the specific devices and products they used, and reported symptoms they experienced as a result of vaping.

Fifty-five percent said they’d had one or more symptoms, with a third reporting symptoms directly linked to EVALI. Cough and nausea were the most common.

Vapers who mixed their own e-liquids were 40% more likely to report symptoms associated with EVALI, and those who used flavored e-cigarettes were 71% more likely.

“Our results indicate that e-cigarette- or vaping-associated lung injury symptoms were not an oddity, a brief occurrence or solely related to the use of THC — the psychoactive component of cannabis — or vitamin E acetate, both of which were pegged as possible contributors to EVALI outbreaks in the past year or so,” Vu said.

The findings were scheduled to be presented at an online meeting of the American Heart Association, Nov. 13-17.

The U.S. Food and Drug Administration has announced plans to step up regulation of e-cigarettes.

These results show why that’s needed, said Aruni Bhatnagar, co-director of the American Heart Association’s Tobacco Center of Regulatory Science and a professor at the University of Louisville School of Medicine in Kentucky.

“There should be much closer regulation of what type of devices are allowed to be on the market,” said Bhatnagar, who wasn’t part of the study. “The lack of regulation is what led to this whole EVALI fiasco.”

“If you do vape — which, again, we’d recommend against — be careful with the products you use and do not self-modify those products,” she said.

“People using mods and refillable cartridges tend to be more experimental and they fill them with different e-liquids and flavors and nicotine concentrations,” Bhatnagar said. “That set of users is more likely to experience symptoms than individuals who just used non-refillable devices.”

The 2020 National Youth Tobacco Survey reported that 3.6 million children and teens use e-cigarettes, and among current users, more than 8 in 10 reported using flavored e-cigarettes, researchers noted.

“We know that almost 90% of cigarette smokers are addicted before the age of 20, and nicotine has very profound effects on the developing brain,” Bhatnagar said in a meeting news release. “This study provides a clear message that despite the belief that e-cigarettes are less harmful or maybe some people even believe completely innocuous, that there is harm, which is even perceived by the people who use them.” How to Quit Smoking: 13 Tips to End Addiction
See Slideshow

Research presented at meetings should be considered preliminary until published in a peer-reviewed medical journal.

The U.S. Centers for Disease Control and Prevention has more about EVALI.