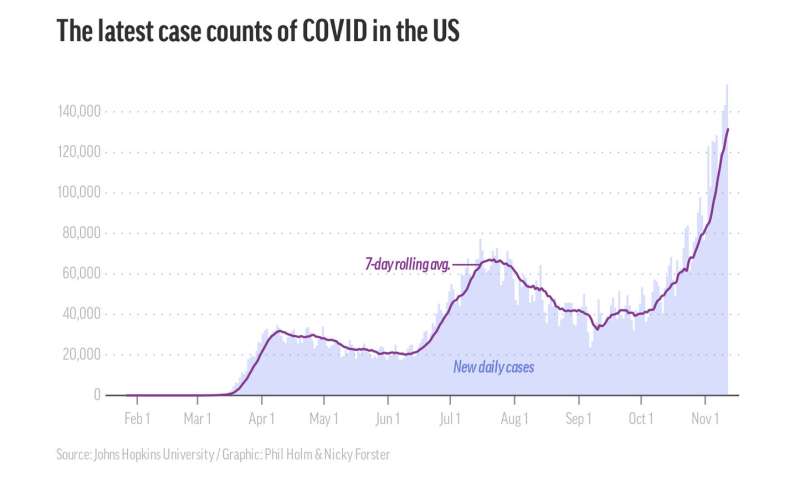 The governors of Oregon and New Mexico ordered near-lockdowns Friday in the most aggressive response yet to the latest wave of coronavirus infections shattering records across the U.S., even as many of their colleagues in other states show little appetite for reimposing the hard-line restrictions of last spring.

“We are in a life-or-death situation, and if we don’t act right now, we cannot preserve the lives, we can’t keep saving lives, and we will absolutely crush our current health care system and infrastructure,” Democratic Gov. Michelle Lujan Grisham of New Mexico said in imposing a two-week stay-at-home order.

Oregon Gov. Kate Brown ordered a two-week “freeze” starting Wednesday under which all businesses will be required to close their offices to the public and mandate work-from-home “to the greatest extent possible.”

While most Oregon stores will remain open, gyms, museums, pools, movie theaters and zoos will be forced to close, and restaurants and bars will be limited to takeout. Social gatherings will be restricted to six people.

The Democratic governor warned that violators could face fines or arrest.

“For the last eight months I have been asking Oregonians to follow to the letter and the spirit of the law and we have not chosen to engage law enforcement,” Brown said. “At this point in time, unfortunately, we have no other option.”

Both states had lockdowns earlier in the year, but the coronavirus is coming back with a vengeance across the country, and the U.S. is facing a long, dark winter. The scourge is blamed for 10.6 million confirmed infections and almost a quarter-million deaths in the U.S., with the closely watched University of Washington model projecting nearly 439,000 dead by March 1.

Deaths have climbed to about 1,000 a day on average. New cases per day are soaring, reaching another all-time high on Thursday of more than 153,000. Hospitals are getting swamped.

Still, there is little will among many governors and other elected officials for going back to the kind of lockdowns and large-scale business closings seen last spring. Some governors also continue to resist issuing statewide mask rules.

Among the reasons given: public fatigue, fear of doing more damage to already-crippled businesses, lack of support from Washington, and the way efforts to tame the virus have become fiercely politicized.

“I think that governors and mayors are, again, in a really tough spot. The American population is emotionally and economically exhausted,” Dr. Megan Ranney, an emergency physician and professor at Brown University in Providence, Rhode Island.

Governors in many states, such as New York, Maryland, Virginia and Minnesota, have instead taken largely incremental measures over the past few days, such as restricting the size of gatherings, making businesses close early, restricting capacity or cutting off alcohol sales earlier in the evening.

Nevada Democratic Gov. Steve Sisolak has repeatedly argued that containing the virus is largely up to individuals.

“Some people are going to ask, ‘Why not limit retail, or casino resorts, or restaurants right now?’ That’s a fair question,” Sisolak said. “That is the tightrope of trying to balance controlling the COVID-19 spread, protecting our hospitals from surges, and at the same time, not destroying and shutting down our economy.”

In Texas, which this week became the first state to surpass 1 million confirmed COVID-19 cases, Republican Gov. Greg Abbott has emphasized new treatments and vaccines that are expected to become available soon.

Texas Attorney General Ken Paxton has taken an even harder line against new restrictions, suing after El Paso closed nonessential businesses because of a surge so severe that mobile morgues are being brought in. An appeals court Thursday temporarily lifted the shutdown.

Officials have gotten pushback from some constituents, especially business owners who fear for their ability to make a living.

In Ohio, Bahram Akradi, founder, chairman and CEO of Life Time health clubs, objected when the governor added gyms to a list of businesses that could be shuttered if cases continue to rise.

“Another shutdown would just be completely devastating and simply unjust,” Akradi said. He added: “The damage of not allowing people to have healthy activity is much more than the gain.”

In Montana, where cases are up more than 16% in the past week, Gov. Steve Bullock, a Democrat, said he is wary of imposing tougher statewide restrictions without additional federal aid to unemployed individuals and small businesses.

“I never wanted to punish the businesses that are doing right in this pandemic to keep their employees and customers safe. Shutting down those businesses would do just that,” he said.

The political perils of statewide mandates have played out in Wisconsin. Democratic Gov. Tony Evers issued a “safer at home” order in March that was challenged by Republican lawmakers and struck down by the conservative-controlled state Supreme Court in May.

The result has been a hodgepodge of local limits across the state, with some of the most strict ones in places like Milwaukee, which is moving forward with imposing steep fines of between $500 and $5,000 for violations of local health orders.

Other governors have likewise relied on local and county officials to tackle the crisis, creating a patchwork quilt of restrictions around the country. But that strategy has its limits.

In Tennessee, Nashville Mayor John Cooper said he doesn’t plan on reinstating restrictions on the city’s honky tonks and other businesses. He said shutting down just one county would probably be ineffective against the virus because the surrounding areas wouldn’t be following the same guidelines.

“We are also subject to what goes on in our state and we can’t keep just our county safe,” Cooper said.

With cases rising rapidly in Mississippi, Republican Gov. Tate Reeves said he will not consider a statewide shutdown of businesses. A statewide mask mandate that he imposed expired at the end of September.

Some economists say the crisis has been falsely portrayed as a choice between the economy and public health. Instead, they argue that the economy cannot recover until the virus is brought under control and people are confident enough to go shopping, eat at restaurants and do other things again.

Some experts have argued, too, that strict but relatively short lockdowns could ultimately result in less economic pain than the half-measures employed now, which have only succeeded in dragging out the crisis.

Ideally, “the way you fight a pandemic is a whole-of-society, a whole-country approach,” Quick said. But in the meantime, governors are “our best hope to prevent catastrophe.”

Dr. Michael Fine, former director of Rhode Island’s Health Department, said the outbreak requires more aggressive strategies. Closing bars earlier in the evening, he said, “might have worked in July, but there’s not a chance they’ll work now. It’s like taking an eyedropper to a forest fire.”

“Short of very profound lockdowns, I don’t think we have a chance of slowing the spread,” Fine said.