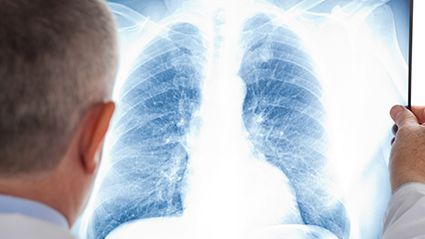 The findings come from one hospital system, but experts said they add to worries about the pandemic’s impact on cancer care.

In the spring, when many U.S. hospitals were overrun with COVID-19 patients and stay-at-home orders were issued, elective medical care — including cancer screenings — was largely delayed.

Research since then has pointed to the early consequences. One study found that in March and April, the United States saw a 46% drop in new diagnoses of six common cancers — a sign that many cases were being missed for lack of screening.

When it comes to lung cancer screening — which is done via low-dose CT scan — rates were already low pre-pandemic.

“Only about 4% of eligible patients were getting screening nationally,” said Dr. Robert Van Haren.

So any sustained decrease in that figure would be concerning, said Van Haren, the lead researcher on the new study and assistant professor of surgery at the University of Cincinnati College of Medicine.

For their study, his team looked at how the situation at their health system has changed during the course of the pandemic.

In March, the university suspended its lung cancer screening program, ultimately canceling more than 800 appointments. The program began reopening in May, with priority given to patients who needed follow-up scans of previously detected growths.

But while screening numbers went up, they remained below pre-pandemic numbers.

Between 2017 and February 2020, 15% of screening appointments were “no shows” — meaning the patient never showed or did not reschedule a canceled appointment. During the pandemic (through the end of July), the no-show rate was 40%.

And the number of new patients going in for a first-time scan ticked up only slightly after reopening.

The pandemic essentially created “a perfect storm,” according to Dr. William Cance, chief medical and scientific officer for the American Cancer Society.

First, he said, it forced shutdowns that later created a backlog of appointments that had to be rescheduled — making it hard for patients to get new appointments.

Then there’s the fear. It’s known, Cance noted, that the pandemic made many Americans hesitant to receive even routine medical care in a doctor’s office.

“There’s also the economic side,” said Cance, who wasn’t part of the study. “So many people lost their jobs and health insurance. For them, it might have been a matter of, ‘Can I put food on the table, or get my mammogram?'”

The full impact of the pandemic — its effects on timely cancer diagnoses and people’s survival — will take time to sort out.

But Van Haren pointed to a concerning finding in this study: a sharp increase in the proportion of patients with potentially cancerous lung growths — from 8% in pre-pandemic times, to 29% during the pandemic.

In many cases, those patients were returning for follow-up after a previous scan showed a growth. But in about 40%, Van Haren said, the growths were new.

Screening can catch lung tumors when they are small enough to remove by surgery, and research suggests it reduces the risk of dying from lung cancer by 20%, Van Haren said.

Right now, annual screening is recommended starting at age 55 for people who have smoked at least 30 “pack-years” over a lifetime, and who either still smoke or have quit in the past 15 years. That translates to one pack a day for 30 years, or two packs a day for 15 years, for example.

Van Haren said medical centers have safety protocols to protect patients who visit for screening. One measure at his health system, he noted, was to move CT screenings from the hospital to an outpatient center.

Cance urged Americans who have missed any cancer screening to talk to their provider about rescheduling and any safety questions they have.

It’s possible, Van Haren said. And that’s yet another reason, he said, that the surge needs to be brought under control. The findings were published Dec. 17 online in the Journal of the American College of Surgeons.

The American Cancer Society has more on lung cancer screening.