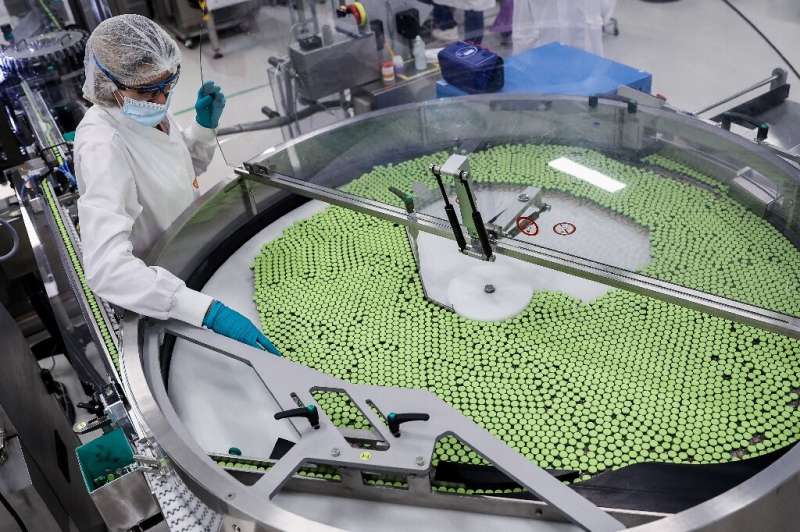 A small country with an outsize reputation in research and pharmaceuticals, Belgium has emerged with a strategic role in the world’s battle against the coronavirus.

The drugs giants racing to develop and produce new vaccines at scale in record time are international, but many of their global supply chains intersect here.

In 2019, before the pandemic, Belgium accounted for 13 percent of EU biopharmaceutical exports and 10 percent of research investment, with just 2.5 percent of the European Union’s population.

Biopharma—the extraction of a drug product from a biological culture—is used in the production of many of the vaccines that governments are rushing to secure.

In Wavre, just outside Brussels, British multinational GSK already produces an adjuvant to be used in future vaccine candidates from France’s Sanofi and Canada’s Medicago.

Now, it is also leaping into the production of a promising jab from German start-up Curevac, which is in clinical trials and could be approved in the EU by May.

“We’re putting part of our production capacity at the service of other companies in order to move more quickly,” GSK Vaccines managing director Patrick Florent told AFP at the plant.

The plan is to produce 100 million doses of Curevac vaccine at the Belgian site this year, a quarter of the total ordered from the firm by the European Commission.

The commission, which is coordinating vaccine purchases for the 27 member states and has promised to support its poorer neighbours, has contracts with five more companies.

And several of these are also hard at work in Belgium, which has sites operated by or on behalf of the world’s 10 biggest private pharmaceutical firms.

US giant Pfizer is supplying the globe with a vaccine designed by German lab BioNTech from its plant in Puurs, a Flemish town previously better known in Belgium for a brand of beer, Duvel.

And when British-Swedish outfit AstraZeneca need to produce a vaccine designed at Oxford University, it turned to a subcontractor in Seneffe, in Belgium’s French-speaking south.

The Seneffe plant, formerly operated by Novasep, was bought by America’s Thermo Fisher in January in a transaction worth 725 million euros ($880 million)—but which also brought with it a public relations headache.

AstraZeneca warned the European Commission last month that it would not be able to meet its delivery promises—and was accused of short-changing Europe while serving its UK contract.

The Belgian plant was identified in reports as a source of production bottlenecks, and has been inspected by Belgian authorities at the request of the European Commission.

Biopharma was a strategic industrial choice for Belgium even before Covid-19 spread around the world, supporting 30,000 jobs, 8,000 of them created in the last decade.

The sector’s trade body, Essenscia, argues that the magic formula has been the use of public money to encourage cooperation between universities and private enterprise.

Belgian firms like Galapagos, Biocartis and Sequana Medical account for two-thirds of the equity in the European biotech sector.

A typical operation would see research conducted at a campus in Louvain or Ghent spun-off into a lab that could attract private investment to exploit a new patent.

Belgian firm Henogen began in this way, with researchers from the Free University in Brussels going into business with GSK and setting up the plant in Seneffe.

This in turn became a hub in Belgium’s BioPharma Valley, before being bought by Novasep and then Thermo Fisher.

“It’s a good example of the weaving of this kind of industrial fabric in Belgium. Most of the spin-offs work out, because the landscape is favourable,” Florent said.

Belgium is also reputed for giving generous tax breaks to firms that re-invest profits in research and to scientists that register patents in the country.

Both of Belgium’s international airports are licensed to export pharmaceuticals, and the one serving the capital, Brussels-Zavantem, boasts it has shipped 15 million doses of vaccine since the crisis began.