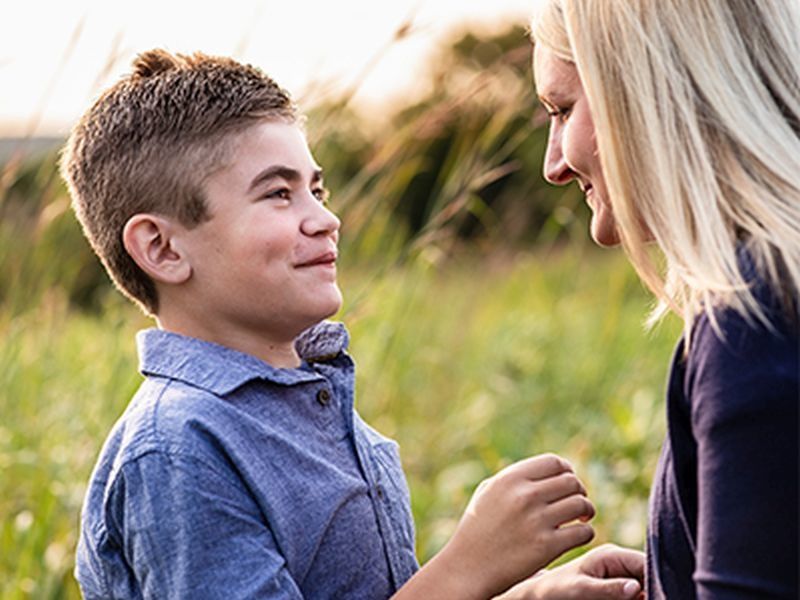 Connor Dobbyn is an energetic and loving 12-year-old, but he’s fading away every second.

Connor has Sanfilippo syndrome, a genetic brain disorder in children that experts compare to Alzheimer’s disease.

The boy already has lost some of what he’s learned in his short time on Earth, and every day he loses a little more.

“We’re on borrowed time. They don’t live through their teens,” said his mom, Marisa DiChiacchio, who lives with Connor in West Chester, Pa. “We have six years left, at most.”

Here’s the good news: Researchers think they’ve found a cure for Connor’s type of Sanfilippo, a therapy that replaces the bad gene in his body with a healthy working version.

But they need millions of dollars in funding to test this potential cure. Connor’s parents have set up a GoFundMe page with a goal of $3 million for a clinical trial that could save their son’s life.

“The research is done. It’s like right there, but they need the money to fund the clinical trial,” DiChiacchio explained.

Kids with Sanfilippo syndrome suffer from the build-up of a long-chain sugar molecule called heparan sulfate, which is normally used by the body to build cartilage, connective tissues, nerve tissues and skin, according to the Nemours Foundation.

These kids have a defect in one of the genes that make enzymes needed to break down heparan sulfate. Without those enzymes, heparan sulfate “builds up everywhere in the body and the brain,” explained Cara O’Neill, chief science officer and co-founder of the Cure Sanfilippo Foundation.

As the substance clogs the brain and body, kids begin experiencing the sort of mental and physical decline associated with dementia in seniors. Kids lose knowledge and skills they’ve gained, develop seizures, experience hearing and vision loss, find it difficult to walk and move, and even struggle to chew and swallow food, O’Neill said.

“These kids become nonverbal. They lose their ability to walk and talk. They’re in wheelchairs and in strollers. Almost all of them develop seizures and different movement disorders,” DiChiacchio said. “There’s literally no cure at this point. These kids are dying.”

Sanfilippo syndrome is relatively rare, occurring in about 1 out of every 70,000 children, O’Neill said.

“We think it’s underdiagnosed because it’s usually masked as autism,” said Glenn O’Neill, president and co-founder of the Cure Sanfilippo Foundation. “Kids exhibit the typical symptoms of autism early in life while parents are trying to figure out what’s going on. But then things actually begin actually going backwards, in the wrong direction.”

That’s what happened with Connor. He’d been struggling with developmental delays since he was 1 year old, and at age 5 he received a diagnosis of autism, DiChiacchio said.

But during a psychological evaluation in the third grade, educators were stunned to find a drastic decline in Connor’s IQ, his mom said.

“It was like a bomb went off,” DiChiacchio said. “His average IQ in kindergarten was 100, and then when they did this re-evaluation it came back his IQ was 60. He had plummeted a fairly large amount of IQ points.”

Connor’s parents took him to a developmental pediatrician at the Nemours/Alfred I. DuPont Hospital for Children in Wilmington, Del., who suggested a broad genetics scan in search of an explanation.

The results were troubling.

“They said listen, there’s something that pops up but we don’t really want to freak you out,” DiChiacchio said. “It’s something called Sanfilippo syndrome, but do us a favor: Don’t go home and Google it. It’s pretty severe, but we need to order a new round of tests so we can rule that out.”

Connor’s parents received the official diagnosis in April 2019 — their son had Sanfilippo Type C, one of four variations of the disease in which genetic defects interfere with different parts of the breakdown pathway of heparan sulfate.

Type C is subtler than types A or B, and takes longer for the kids to start showing obvious signs of regression, DiChiacchio said.

“The one and only thing we have noticed is when he’s walking his knees are sort of buckling in a little tiny bit,” she said. “He’s stuck in a kindergarten mind in at this point a 12-year-old body, but he’s been like that. There’s nothing really new.”

Researchers have identified the broken gene that causes Sanfilippo Type C, and have created a way to introduce a healthy copy of the gene into the body via a virus, Cara O’Neill said.

The gene-carrying virus would be injected into the spinal fluid, from which it would be expected to spread into the brain, spinal cord, nerves and body tissues, O’Neill said.

The $3 million being raised by Connor’s parents would be used to pay for production of enough of the genetic cure for a clinical trial, as well as the trial itself, which would take place at UT Southwestern Medical Center in Dallas, O’Neill said.

“The hope is the clinical trial will show the same promise that it’s showing in the preclinical model in children,” O’Neill said. “Otherwise, children with Sanfilippo Type C will have no chance. Their decline is happening every second. It gets worse and worse every second. It never gets better.”

For more about Connor Dobbyn’s battle with Sanfilippo, visit his GoFundMe page.