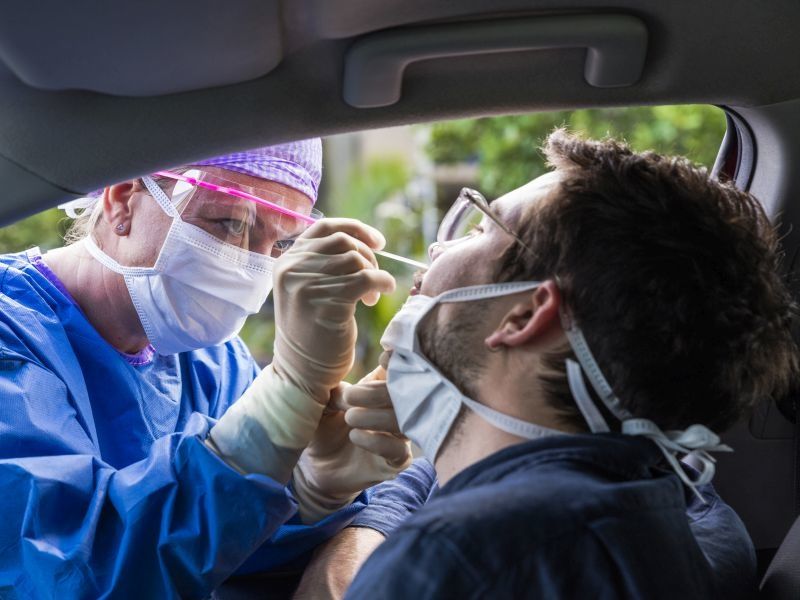 The amount of COVID-19 testing being done in the United States has fallen by 30 percent in recent weeks, even though testing can curb the spread of coronavirus and spot new outbreaks quickly.

From a high of nearly 14 million tests a week in early January, the pace fell to fewer than 10 million — a level not seen since October — for the week ended Feb. 24, The New York Times reported.

But Dr. Anthony Fauci, the nation’s top infectious diseases expert, warned Sunday that Americans shouldn’t get complacent because the number of new cases is now leveling off.

“Let’s get many, many more people vaccinated,” Fauci said on the CBS show, Face the Nation. “And then you could pull back on those types of public health measures. But right now, as we’re going down and [then] plateauing, is not the time to declare victory because we’re not victorious yet.”

As of Monday, 75.2 million Americans have been vaccinated, with nearly 24.8 million people getting their second shot, according to the U.S. Centers for Disease Control and Prevention.

As for drops on COVID-19 testing, some areas are reporting even sharper declines: Michigan is testing about half as many people now as it was in November, and Delaware’s state-run sites are testing about one-third as many. Los Angeles County’s sites, which were running flat out last month, tested just 35 percent of their capacity last week, the Times reported.

Experts suggested that several factors could be fueling the testing slump, the Times reported:

All those forces could be at play, Dr. Jennifer Nuzzo, of the Johns Hopkins Bloomberg School of Public Health, told the Times.

“My sense is that it’s probably that there are fewer options for testing, fewer communications about it, people may be perceiving that it’s less necessary — maybe they just don’t see the point any more,” she said. But, “there’s nothing about the current situation that has made testing any less necessary.”

Less testing makes it harder to follow the virus’s mutations and to get ahead of variants that may be more contagious or deadly, Dr. Rick Pescatore, the chief physician at the Delaware Division of Public Health, told the Times. “We can’t identify variants until we first identify positives,” he said.

The U.S. Food and Drug Administration on Saturday approved Johnson & Johnson’s single-shot coronavirus vaccine for emergency use after its advisory panel unanimously backed the vaccine a day earlier.

Adding a third vaccine to the country’s arsenal will help boost the nation’s limited supply of the two authorized shots, from Pfizer and Moderna.

Nearly 4 million doses of the newest COVID-19 vaccine will be shipped Sunday night, and will begin to be delivered to states for injections starting on Tuesday, the Associated Press reported.

The White House said the entire stockpile of the newly approved single-dose Johnson & Johnson vaccine will go out immediately. J&J will deliver about 16 million more doses by the end of March and 100 million total by the end of June.

“It’s a relatively easy call; it clearly gets way over the bar, and it’s nice to have a single-dose vaccine,” said Eric Rubin, an infectious diseases specialist at the Harvard T.H. Chan School of Public Health and a member of the FDA advisory panel. He told the Washington Post that, “it’s a bit challenging about how to use it clinically right now, but the demand is so large, it clearly has a place.”

“The addition of a third COVID-19 vaccine substantially reduces the time it takes the U.S. to reach herd immunity — when a high enough proportion of the population is immunized and we can disrupt the spread of this disease,” said Dr. Lisa Lee, a public health expert who specializes in infectious diseases.

“Getting 75-85% of the population vaccinated will be easier with this additional vaccine option, especially because it, unlike the first two, does not require a complex frozen or ultra-frozen transport and storage system, and requires only one shot, instead of the two required by the others,” said Lee, who is associate vice president for research and innovation at Virginia Tech.

FDA briefing documents showed the J&J vaccine had an overall efficacy rate of 72 percent in the United States and 64 percent in South Africa, where a concerning variant emerged in the fall and has since spread to the United States, the Times reported.

The vaccine was particularly effective at preventing severe illness or death: It showed 86 percent efficacy against severe forms of COVID-19 in the United States, and 82 percent against severe disease in South Africa. None of the nearly 22,000 vaccinated people in the trial died of COVID-19.

In a hopeful turnaround during a long pandemic, U.S. nursing homes that were once the epicenter of coronavirus infections are now seeing both cases and deaths fall steeply as the country’s vaccination rollout takes hold.

From late December to early February, new cases among U.S. nursing home residents fell by more than 80 percent, nearly double the rate of improvement in the general population, the Times reported. The downward trend in deaths was even more heartening: Even as fatalities spiked overall this winter, deaths inside nursing homes have dropped by more than 65 percent.

“I’m almost at a loss for words at how amazing it is and how exciting,” Dr. David Gifford, chief medical officer for the American Health Care Association, which represents thousands of long-term care facilities across the country, told the Times.

The good news comes not a moment too soon: Since the pandemic began, the coronavirus has raced through some 31,000 long-term care facilities in the United States, killing more than 163,000 residents and employees and accounting for more than a third of all virus deaths since the late spring, the Times said.

But with the arrival of vaccines, which were sent to long-term care facilities starting in late December, new cases and deaths in nursing homes have fallen steeply, outpacing national declines, the Times reported. It offers an early glimpse of what might be in store for the rest of the country, as more and more people get vaccinated.

“If we are seeing a robust response with this vaccine with the elderly with a highly contagious disease, I think that’s a great sign for the rest of the population,” Giffords told the Times.

About 4.5 million residents and employees in long-term care facilities have received at least one dose of the vaccine, according to the U.S. Centers for Disease Control and Prevention, including about 2.1 million who have been fully vaccinated.

Now, new cases in nursing homes are at their lowest point since May, when the federal government began tracking such data, the Times said.

“What is certainly surprising to me is how quickly we’re seeing this,” Dr. Sunil Parikh, an associate professor of epidemiology and medicine at Yale School of Public Health in Connecticut, told the Times.

In India, the coronavirus case count was more than 11.1 million by Monday, a Johns Hopkins University tally showed. Brazil had over 10.5 million cases and nearly 255,000 deaths as of Monday, the Hopkins tally showed.

Worldwide, the number of reported infections passed 114.2 million on Monday, with over 2.5 million deaths recorded, according to the Hopkins tally.