Singapore gets shot in the arm from global drug demand

Singapore gets shot in the arm from global drug demand 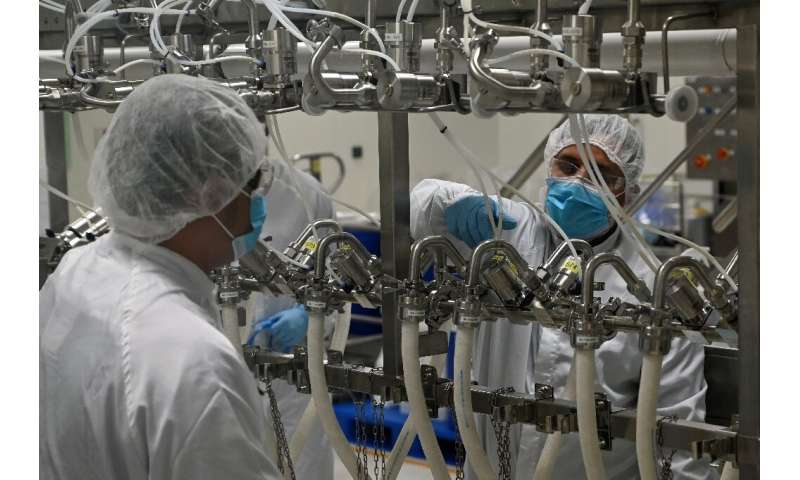 Scientists in protective clothing work in a high-tech laboratory at a pharmaceutical plant in Singapore, whose coronavirus-hit economy has received a shot in the arm from robust global drug demand.

The city-state is on course for its worst ever recession this year but factory activity has held up, thanks partly to countries rushing to stockpile medicines during the pandemic.

The nation just half the size of Los Angeles has become a centre for drug makers and is home to more than 50 factories, owned by big players including Pfizer, Roche, GlaxoSmithKline and Takeda.

And in 2020, “governments and private-sector firms have been building up inventories of critical drugs as a result of the severe supply chain disruptions in many countries during the pandemic”, he added.

Data highlights the benefits for the trading hub—biomedical manufacturing, which covers pharmaceuticals, has grown strongly, with output expanding 90 percent on-year in September alone.

Exports also defied expectations of a collapse and posted growth most of the year, helped by drug shipments, although they slipped back in October and November.

While much attention has focused on vaccine development, strong demand for medicines to treat illnesses ranging from asthma to epilepsy has underpinned the continued good fortunes of the pharmaceutical giants in the city, industry players and analysts say.

It is a much-needed boost after Singapore’s economy shrank more than 13 percent in the second quarter when the country introduced tough virus curbs.

With borders largely closed, the key tourism sector has been particularly hard-hit with arrivals falling to just 13,400 in October from 1.7 million in January.

Singapore’s outbreak has been relatively mild, however, with the city-state recording around 58,000 cases and 29 deaths, while the economy began recovering in July-September as restrictions were eased.

The city had long been a major exporter of electronics, from microchips to computer hard disks, but has sought to diversify its manufacturing sector.

The biomedical industry—which also covers making high-tech medical devices such as pacemakers—now employs more than 24,000 people and accounts for about 20 percent of the manufacturing sector, according to risk consultancy Fitch Solutions.

Singapore, with a population of 5.7 million, is one of the few countries that exports more pharmaceuticals than it imports—in 2019 it shipped pharma products worth US$8.1 billion while importing US$3.1 billion-worth, according to Fitch.

Authorities have promoted cutting-edge research to grow the economy, committing to invest nearly US$20 billion in research and innovation for the next five years.

Amid a network of stainless steel pipes and storage tanks, Takeda’s facility grows cells from hamster ovaries to make ingredients for drugs to treat haemophilia, a rare disorder that affects the blood’s ability to clot.

The final product is flown to Switzerland, Vienna or California where it is mixed with other ingredients and put in vials, before being sent to Belgium for packing and then shipped worldwide.

“Overall, the pharma industry in Singapore has not been adversely impacted by the pandemic,” George Lam, who heads the company’s Singapore manufacturing site, told AFP during a visit.

“Because we are not affected we continue to manufacture, we continue to export our drugs to the global markets… A number of pharma companies in Singapore are doing life-saving medicines.”

It has not been all smooth sailing for the company’s Singapore operation. Some of its workers got stranded in neighbouring Malaysia when borders were closed, although the site managed to continue operating.

The health of Singapore’s drug sector is a rare bright spot for the city’s economy, and also for trade worldwide.

The value of global trade is set to fall by up to nine percent on-year in 2020, the United Nations has forecast, and leaders in the export-dependent city-state remain nervous about the outlook.

“We expect recovery next year to be gradual and uneven because of recurrent waves of infection in other countries, and the uncertainties associated with the pace of vaccine production, distribution and vaccination,” said Trade Minister Chan Chun Sing.

“We will not return to the pre-COVID world.”

Citation:
Singapore gets shot in the arm from global drug demand (2020, December 20)
retrieved 21 December 2020
from https://medicalxpress.com/news/2020-12-singapore-shot-arm-global-drug.html