Some Europeans get choosy about which vaccines they want

Some Europeans get choosy about which vaccines they want 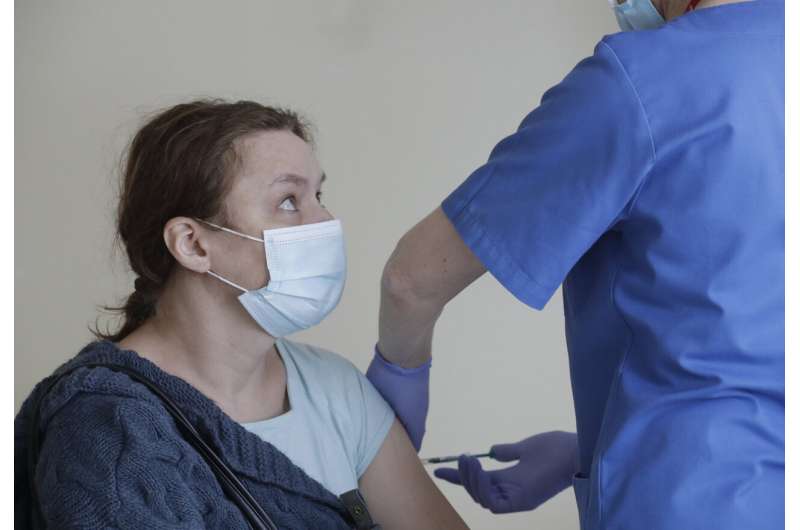 Many Europeans are desperate for a coronavirus vaccine. But not just any vaccine.

As AstraZeneca shots are rolling out to European Union nations this month, joining the Pfizer and Moderna doses already available, some people are balking at being offered a vaccine that they perceive—fairly or not—as second-best.

Poland began vaccinating teachers Friday with the AstraZeneca vaccine, and some had misgivings about being put in line for a vaccine they believe is less effective than the others.

Ewelina Jankowska, the director of a primary and high school in Warsaw’s southern Wilanow district, said nobody in her school was enthusiastic about getting the AstraZeneca shot, although many signed up, eager for any protection against a virus that has upended their lives and their students’ schooling.

“I still fear the illness more than the AstraZeneca vaccine,” said Jankowska, who was infected with COVID-19 in November and had a very slow recovery.

AstraZeneca, an Anglo-Swedish company, developed its vaccine with the University of Oxford. While regulators in more than 50 countries, including the EU’s drug watchdog, have authorized its widespread use, it has attracted more criticism than others due to concerns about its human trials.

Several European nations have recommended the drug only for people under 65, and other countries have recommended it for those under 55, because AstraZeneca’s trials included a relatively small number of older people.

AstraZeneca CEO Pascal Soriot acknowledged the criticism but said regulators had reviewed the data and deemed the vaccine safe and effective. COVID-19 vaccines are in short supply, he said, and the AstraZeneca shot offers high levels of protection against severe disease, which is the most important benchmark in fighting a virus that has killed more than 2.3 million people worldwide.

“Is it perfect? No, it’s not perfect, but it’s great,” Soriot said Thursday. “We’re going to save thousands of lives and that’s why we come to work every day.”

The World Health Organization says the AstraZeneca vaccine is about 63% effective at preventing symptomatic COVID-19 after two doses. That’s less than the 95% effectiveness reported by Pfizer and Moderna, but experts caution against such comparisons as the studies were done at different times and under different conditions. Furthermore, all have proven extremely effective at preventing serious illness and death.

“If you’re offered any approved vaccine, take it,” said Peter Piot, director of the London School of Hygiene and Tropical Medicine. “They have all been found safe. Vaccines are the world’s route back to some sort of normality.”

French President Emmanuel Macron angered scientists last month when he called the AstraZeneca vaccine “quasi-ineffective” for people over 65—a comment that came hours before the European Medicines Agency approved it and said it could be used for all adults, including those over 65. Those who criticized Macron argued that he had spoken irresponsibly and had encouraged vaccine skepticism.

French Health Minister Olivier Veran, who is 40, made a point this week of getting the AstraZeneca vaccine to show government confidence in it for under-65s.

Adding to AstraZeneca’s troubles have been criticism from the EU about delivery shortages, its lack of approval yet in the U.S., and a preliminary study that raised questions about the vaccine’s ability to combat a COVID-19 variant discovered in South Africa. In its favor, however, is that it is cheaper and can be stored at refrigerator temperatures—not the far colder temperatures required of the Pfizer and Moderna vaccines.

In Cyprus, Health Minister Constantinos Ioannou warned that opting for one over another risks delaying inoculations, given the limited deliveries of Pfizer and Moderna vaccines in the coming weeks, and he noted “all three vaccines reduce hospitalizations and deaths drastically.”

Yet in Poland, Spain and Italy, some unions complained that their members are slated to receive the AstraZeneca vaccine, expressing concerns they were being treated as less important than groups getting the Pfizer or Moderna doses.

Police unions in Spain have raised concerns about a government decision to administer AstraZeneca shots to police, military, firefighters and teachers.

Some Italian doctors in the private sector are declining AstraZeneca shots, saying they want the Pfizer or Moderna shots going to public health care workers.

“I’m not a no-vax AstraZeneca. But for an at-risk population, health care workers, they should use the same vaccination strategy for everyone and not create any discrimination,” said Dr. Paolo Mezzana, a Rome plastic surgeon who helps administer a Facebook group of private doctors. They have been posting refusals to accept the AstraZeneca shot after vaccinations began this week.

In Poland, the government announced earlier this month that the planned delivery of more than 1 million AstraZeneca doses meant teachers could get their shots ahead of schedule because the vaccine would not be given to older adults.

But instead of expressing relief, the head of the main teachers’ union, Slawomir Broniarz, criticized the use of the vaccine in remarks that, in turn, came under fire from scientists and the government.

Michal Dworczyk, who leads the government’s vaccine effort, said he regretted “that some irresponsible politicians or trade unions have tried to scare teachers or cause such anxiety by giving false information about the AstraZeneca vaccine.”

Yet a sense of misgiving has settled in among teachers, who already have been in conflict with the government for years over low wages and unpopular reforms.

Patrycja Swistowska, who teaches second grade at the Wilanow school, said she signed up for the AstraZeneca shot despite her fears and confusion.

“I feel that teachers are treated a bit worse and this is the vaccine that they offered us. They didn’t offer us the vaccines given to doctors and other professional groups,” said Swistowska, 39. “I am disoriented and I don’t feel good about this. We are paid worse and this is just another example of us being shown our place.”

In Italy, the head of the SAP police union, Stefano Paoloni, argued that if officers believe they are getting a less-effective vaccine via the police force, they can opt out and wait to get another shot later when the rest of the population is vaccinated. That would defeat the strategy to vaccinate as many at-risk people as quickly as possible.

Some unions are going ahead with the AstraZeneca rollout without complaining, reflecting gratitude to get any protection.

Dr. Arianna Patricarca, a 52-year-old Italian dentist who received the AstraZeneca shot Thursday, called it “a great opportunity and I am very happy that I did it.”

“It is a great relief,” said Grabowska, 48, adding that she was exhausted after a year of the pandemic.

“I have been waiting for this moment all year,” she said.

Citation:
Some Europeans get choosy about which vaccines they want (2021, February 13)
retrieved 13 February 2021
from https://medicalxpress.com/news/2021-02-europeans-choosy-vaccines.html