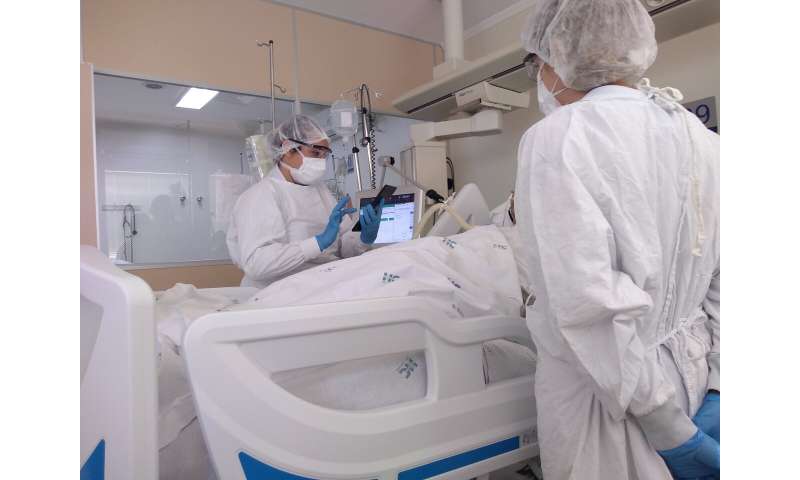 Two independent clinical studies—one by researchers at the Center for Cell-Based Therapy (CTC) in Ribeirão Preto, state of São Paulo (Brazil), on the monoclonal antibody eculizumab, and the other by scientists at the University of Pennsylvania in Philadelphia (U.S.) on an experimental drug called AMY-101—observed a significant anti-inflammatory effect that contributed to a faster recovery by severe COVID-19 patients. The results of the two studies, which set out to compare the compounds’ therapeutic potential, are reported in an article published in Clinical Immunology.

The two medications were administered separately. The monoclonal antibody, routinely used to treat blood diseases, was tested on patients at the teaching hospital (“Hospital das Clínicas”) run by the University of São Paulo’s Ribeirão Preto Medical School (FMRP-USP). AMY-101, a candidate drug developed by US-based pharmaceutical company Amynda, was given to patients at a hospital in Milan, Italy. Both produced promising results, but because AMY-101 is cheaper and performed better in the clinical trial, the two research groups envisage testing it on a larger number of patients in Brazil.

“Both compounds caused a robust anti-inflammatory response that culminated in a fairly rapid recovery of respiratory function in the patients,” Rodrigo Calado, who led the study at FMRP-USP, told Agência FAPESP. Calado is affiliated with CTC, a Research, Innovation and Dissemination Center (RIDC) funded by FAPESP and based at FMRP-USP’s blood center.

The researchers concluded that the therapeutic benefits of eculizumab and AMY-101 were due to inhibition of a bloodstream cascade of proteins involved in immune response and known as the complement system.

Persistent dysregulated complement activation triggers the exacerbated inflammatory response to SARS-CoV-2 infection characterized by a systemic increase in pro-inflammatory cytokines and often referred to as a “cytokine storm.”

Unable to prevent infection of cells by the virus, the complement system enters a spiral of runaway continuous activation that leads to massive infiltration of monocytes and neutrophils into the infected tissues. This process can result in inflammatory damage to the walls of blood vessels surrounding vital organs, as well as disseminated microvascular injury and thrombosis, potentially culminating in multiple organ failure.

“Previous studies had shown the use of complement inhibitors to be a promising therapeutic strategy to ameliorate thromboinflammation in COVID-19 patients, and there were reports of cases with positive results,” Calado said. “However, as yet no one had elucidated the action or evaluated the efficacy of drugs already in use to treat diseases caused by complement alterations, such as eculizumab, or candidate drugs with this function such as AMY-101.”

To fill the gap the researchers conducted two clinical studies in which they compared the biological efficacy of eculizumab with that of the synthetic peptide AMY-101 in independent small groups of severe COVID-19 patients.

Ten patients aged between 18 and 80 were undergoing treatment at FMRP-USP’s Hospital das Clínicas. Once a week while hospitalized, they were given 900 mg of eculizumab, which inhibits the complement protein C5. Three patients hospitalized in Milan, Italy, were given 5 mg of AMY-101, developed to inhibit complement protein C3, also once a week. These two proteins perform the most important activities in the complement system.

The patients’ clinical responses showed that eculizumab and AMY-101 elicited a robust anti-inflammatory process, a sharp fall in levels of C reactive protein (CRP) and interleukin-6 (IL-6), and a marked improvement in lung function.

Inhibition of C3 by AMY-101 afforded broader therapeutic control, stronger lymphocyte recovery, a pronounced decline in neutrophil count, and more robust attenuation of the thromboinflammation induced by the exacerbated response to viral infection.

“The results of the clinical trials showed that inhibiting components of the complement system sharply reduces inflammation,” Calado said.

In light of the promising results of the two clinical trials, the CTC and UPenn researchers now plan to conduct a Phase 3 trial with more than 100 severe COVID-19 patients, who will be given only AMY-101 in an effort to assess the drug’s efficacy on a wider scale.

The study will be conducted at FMRP-USP’s Hospital das Clínicas, and will probably involve other research institutions in Brazil. “One of the advantages of AMY-101 is its low cost. It’s much less expensive than eculizumab,” Calado said.