US ramps up vaccinations to get doses to more Americans

US ramps up vaccinations to get doses to more Americans 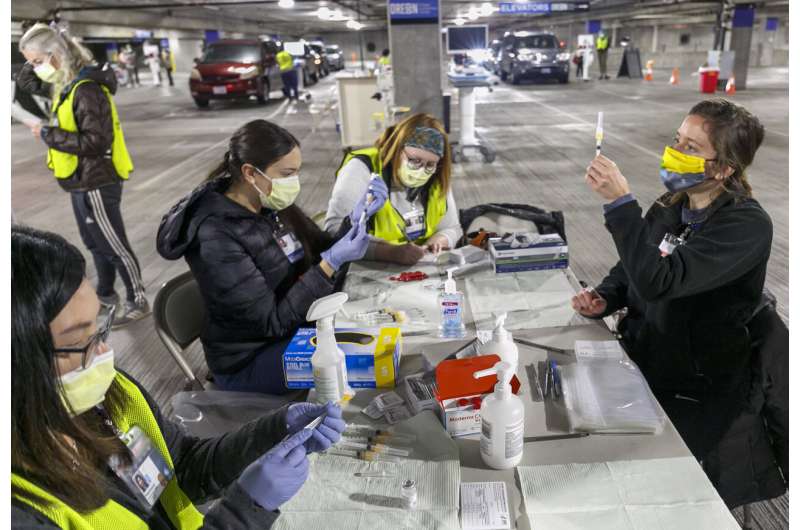 The U.S. is entering the second month of the biggest vaccination drive in history with a major expansion of the campaign, opening football stadiums, major league ballparks, fairgrounds and convention centers to inoculate a larger and more diverse pool of people.

After a frustratingly slow rollout involving primarily health care workers and nursing home residents, states are moving on to the next phase before the first one is complete, making shots available to such groups as senior citizens, teachers, bus drivers, police officers and firefighters.

“Every shot in the arm is a step closer to ending this pandemic,” Michigan Gov. Gretchen Whitmer said.

Similarly, in Britain, where a more contagious variant of the virus is raging out of control and deaths are soaring, seven large-scale vaccination sites opened Monday at such places as a big convention center in London, a racecourse in Surrey and a tennis and soccer complex in Manchester.

Across the U.S., where the outbreak has entered its most lethal phase yet and the death toll has climbed to about 375,000, politicians and health officials have complained over the past several days that too many shots were sitting unused on the shelves because of overly rigid adherence to the federal guidelines that put an estimated 24 million health care workers and nursing home residents at the front of the line.

As of Monday morning, nearly 9 million Americans had received their first shot of the vaccine, or 2.7% of the U.S. population, according to the Centers for Disease Control and Prevention. Experts say as much as 85% will have to be inoculated to achieve “herd immunity” and vanquish the outbreak.

Many states are responding by throwing open the line to others and ramping up the pace of vaccinations, in some cases offering them 24-7.

Arizona, with the highest COVID-19 diagnosis rate in the U.S., planned to dispense shots beginning Monday in a drive-thru, round-the-clock operation at the suburban Phoenix stadium that is home to the NFL’s Arizona Cardinals. Shots are being offered to people 75 and older, teachers, police and firefighters.

In Texas, Dallas County was scheduled to open a vaccine megasite on Monday on the grounds where the Texas State Fair is held. In Houston, nearly 4,000 people were vaccinated Saturday at Minute Maid Park, the home of baseball’s Houston Astros.

Detroit is turning its TCF convention center into a vaccination center starting Wednesday, with officials planning to schedule 20,000 appointments over the next month for people 75 and older. Police officers and bus drivers can also start to get vaccinated there at the end of the week.

“We are going to keep ramping up our vaccinations to the maximum extent the supply allows,” Detroit Mayor Mike Duggan said.

As Colorado moves into its next phase of vaccine distribution for people 70 and older, frustration is growing among senior citizens who say they have received little to no direct communication from local public health officials and don’t even know where to start the process.

Joyce Ballotti, 85, and her 94-year-old husband went to a vaccination site in Pueblo, Colorado, on Monday that was supposed to begin at 9 a.m. But around 8:45 a.m., they were turned away because it had run out of vaccines.

“When we saw that exit locked, we said, ‘Uh-oh, the city has screwed up again,'” Ballotti said.

A police officer managing traffic waved them away, and they received no guidance on other vaccine sites. Ballotti said she is angry, disappointed and frustrated about the process.

“I’m about ready to get it not at all,” she said, noting that the couple’s son had taken off from work to drive them and now they have to try to do it all over again another day. “I can’t ask my son to spend his time on fruitless errands.”

In California, one of the deadliest hot spots in the U.S., authorities opened a drive-thru “vaccination superstation” Monday in a parking lot near the ballpark where the San Diego Padres play. The goal is to inoculate 5,000 health care workers a day. They will remain in their vehicles while they are given a shot, and will be asked to stay there for 15 minutes so they can watched for any reactions.

California hit another gloomy milestone, surpassing a death toll of 30,000. It took the state six months to record its first 10,000 deaths but barely a month to go from 20,000 to 30,000. Over the weekend, California reported a two-day record of 1,163 deaths. Hospitalizations also have exploded, and many medical centers are being pushed to the breaking point.

About 584,000 doses have been administered in California, or about 1.5% of the population.

Florida, the longtime retirement haven with one of the biggest concentrations of elderly people in the country, is using Hard Rock Stadium in Miami Gardens to dispense shots.

Florida followed federal recommendations in starting vaccinations first for front-line health workers and nursing home residents in mid-December. A little over 402,000 doses have been administered there, or just under 2% of its population.

However, instead of putting essential workers and people over 75 next in line, as those recommendations suggested, or fully completing the first group of recipients, Gov. Ron DeSantis moved to to open up vaccinations more broadly to people 65 and over.

The rollouts have been uneven across the state’s counties but have been met with huge demand, with some people standing in line in the chill or camping out in cars overnight. DeSantis said drive-thru sites will be ramped up in the coming days.

There are also questions of whether the rich or well-connected are getting unfair access. Florida is investigating an upscale nursing home amid reports that it administered the vaccine to wealthy donors and members of a country club along with its residents and employees.

In New York City, the epicenter of the outbreak last spring. two 24-7 sites opened and several more are expected to be up and running over the next two weeks. Appointments for the midnight-to-4-a.m. shift on Tuesday were snapped up quickly, Mayor Bill de Blasio said. As of Monday, the state began offering vaccines to people over 75, teachers, transit workers and other front-line workers.

“So you can see New Yorkers are going to take advantage of this,” the mayor said. “The city that never sleeps, people are immediately grabbing those opportunities to get vaccinated.”

Citation:
US ramps up vaccinations to get doses to more Americans (2021, January 11)
retrieved 11 January 2021
from https://medicalxpress.com/news/2021-01-ramps-vaccinations-doses-americans.html