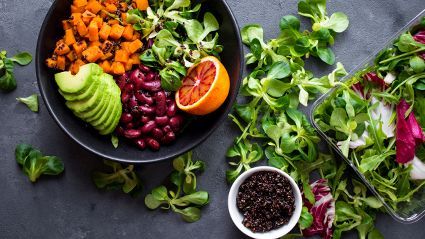 Chew on this: Vegans face a 43% higher risk for bone fractures than meat eaters, a large British study warns.

The rise in risk was not confined to vegans, who eat no meat, fish, dairy or eggs. The researchers also identified a notably higher risk for hip fractures among those who eat fish but no meat (pescatarians), and among vegetarians who swear off both meat and fish, but do consume dairy and/or eggs.

The findings follow several decades spent tracking diet and fracture risk among roughly 55,000 Britons. All had enrolled in the EPIC-Oxford study between 1993 and 2001. (EPIC, or European Prospective Investigation Into Cancer and Nutrition, is one of the world’s largest cohort studies.)

For this look at diet and fracture risk, “we analyzed data collected over 18 years, on average, and found that vegans, vegetarians and pescatarians had higher risks of hip fractures than meat eaters,” said lead author Tammy Tong, a nutritional epidemiologist at the University of Oxford.

“[Hip fracture] risk in vegans was 2.3 times higher than in people who ate meat, equivalent to 15 more cases per 1,000 people over 10 years,” she said. “In addition, vegans also had a higher risk of fractures anywhere in the body, as well as fractures of the legs and vertebrae when compared to the meat eaters.”

Tong and her colleagues published their findings online Nov. 22 in the journal BMC Medicine.

Diets were assessed when participants enrolled in the EPIC-Oxford study, and again in 2010. (Supplement intake was not assessed.) Fracture risk was tracked through 2016 through National Health Service records collected in England, Scotland and Wales.

The higher fracture risk seen among participants who did not eat meat did taper off after the team accounted for the amount of calcium and total protein in each participant’s diet. Heightened risk also dropped off a bit once body mass index (BMI, a measure of body fat based on height and weight) was taken into account.

Yet risk among non-meat eaters still remained significantly higher. Why?

“For one thing, vegans, vegetarians and pescatarians all had lower BMI than the meat eaters,” Tong noted. And higher BMI, she said, has been linked to better cushioning during a fall, enhanced estrogen production, and generally stronger bones.

Tong noted that calcium and protein intake are also important for bone health, and non-meat eaters’ intakes of these were lower. Calcium intake was particularly low among vegans in this study.

But even after taking all of that into consideration, vegans still had a higher overall risk of fracture, as well as a higher specific risk for broken legs and hips. Tong said that may suggest other, unidentified factors could influence bone health. Further study is needed.

Lona Sandon, a program director in the department of clinical nutrition at the University of Texas Southwestern Medical Center in Dallas, reviewed the results.

“The findings are not terribly surprising,” she said, noting that “vegetarian and vegan diets are not always healthy and can lack many nutrients.”

Sandon added that these diets are associated with lower body weight, which is itself a risk factor for low bone density. Lower muscle mass can also be a factor, she said.

“Vegetarians who include milk, eggs, cheese or yogurt in their diet can usually get the needed nutrients,” she said. “Vegans will likely come up short on the nutrients mentioned above as well as others including essential B vitamins, iron and zinc if they do not put much thought into their food choices.”

What is another medical term for osteoporosis?
See Answer

Sandon said meat is not essential for a healthy diet but including some meat, poultry or fish every once in awhile can provide “a lot of bang for your buck where nutrients are concerned.”

Learn more about non-meat diets at the U.S. National Institutes of Health.