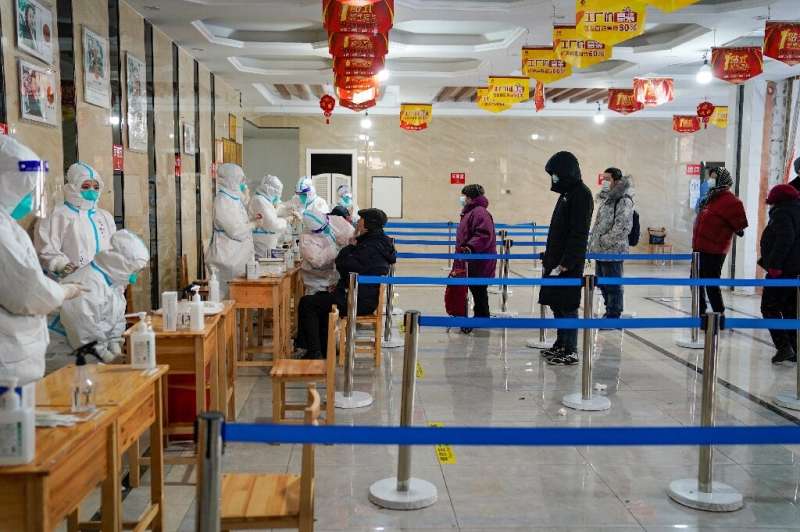 Global health experts gathered on Thursday to tackle new coronavirus strains blamed for a fresh surge in infections as countries including Britain and France tightened restrictions to head off a further worsening of the pandemic.

The World Health Organization (WHO) emergency committee session came as their colleagues were seeking the origins of the virus on a long-delayed mission to the pandemic ground zero in Wuhan.

Almost two million of the more than 91 million people who have caught the disease have died, but the figures are widely believed to be an underestimate.

“When you first met almost a year ago, just 557 cases of the disease we now call COVID-19 had been reported to WHO,” WHO director-general Tedros Adhanom Ghebreyesus said in his opening remarks to the emergency meeting.

Much of the planet is facing a second or third wave of infections, with populations chafing under painful and economically damaging restrictions.

Already hard-hit by a new variant at home, Britain announced Thursday it was banning all arrivals from South America, Panama, Cape Verde and Portugal.

The step was taken over fears of importing yet another new coronavirus variant in Brazil, where the northern Amazonas state announced a 7 pm to 6 am curfew.

The health system has been pushed to breaking point in the state capital Manaus.

The strain, known as E484K, was detected initially in South Africa and on subsequent variants in Brazil and Japan, and it has raised greater alarm among researchers over its possible impact on immunity.

Partly over fears of new variants, France said it would impose a daily nationwide curfew at 6 pm starting Saturday and remaining in force for at least two weeks.

Most of France had been under an 8 pm curfew, with some areas, especially in the hard-hit east, already under the stricter 6 pm limit.

They quoted her as saying the virus could only be stopped with “significant additional measures”.

Lebanon meanwhile went into full lockdown with residents barred even from grocery shopping.

There was better news for those who have already had COVID-19, with a British study suggesting recovery can confer immunity for at least five months.

But the virus’s new strains were causing increasing worry and went under the WHO microscope in Geneva on Thursday after being logged in dozens of countries.

In China, millions of people have been locked down again to try to tame a fresh outbreak that has now claimed the country’s first reported COVID-19 death in eight months.

The death comes as a 10-strong investigation team arrived in Wuhan, where the virus emerged in late 2019.

Mission leader Peter Ben Embarek said they would enter a two-week hotel quarantine before the probe begins in earnest.

It “could be a very long journey before we get a full understanding of what happened,” he cautioned.

Regardless of origins, scientists say large-scale vaccination is the only way out.

But while the rapid development of vaccines has raised hopes, 95 percent of doses so far administered were limited to only 10 countries, the WHO’s European branch said.

Progress on administering vaccines has often been slow, such as in the United States, where more than 4,000 people are dying every day and around 10 million have received a first shot.

Turkey launched a vaccination drive with China’s Sinovac jab on Thursday despite conflicting data abouts its efficacy, with President Recep Tayyip Erdogan among those receiving the jab.

In Africa, where many countries have so far avoided the worst of the pandemic, governments were called on to take urgent steps to prepare for vaccine distribution.

At the Vatican, Pope Francis, aged 84, and his predecessor, former pope Benedict XVI, 93, have both received vaccines, the Vatican said Thursday.

However former world tennis number one Andy Murray’s participation in the Australian Open was thrown into doubt after it was revealed Thursday he had tested positive.

Sport has provided some diversion for many trapped at home, but top-flight athletes were warned this week to lead by example.

English Premier League bosses warned clubs they could be sanctioned if players shake hands or hug after goals.

In India, hundreds of thousands of Hindu pilgrims gathered by the Ganges river for the Kumbh Mela festival—trusting in faith rather than masks to protect them.

“The pandemic is a bit of a worry, but we are taking all precautions,” said organiser Siddharth Chakrapani.

“I’m sure Maa Ganga will take care of their safety,” he said, referring to the sacred river.